Is Forward Air Corporation (FWRD) A Good Stock To Buy?

Is Forward Air Corporation (NASDAQ:FWRD) ready to rally soon? The best stock pickers are becoming less hopeful. The number of bullish hedge fund positions dropped by 1 recently. Our calculations also showed that fwrd isn’t among the 30 most popular stocks among hedge funds. FWRD was in 15 hedge funds’ portfolios at the end of September. There were 16 hedge funds in our database with FWRD holdings at the end of the previous quarter.

What have hedge funds been doing with Forward Air Corporation (NASDAQ:FWRD)? 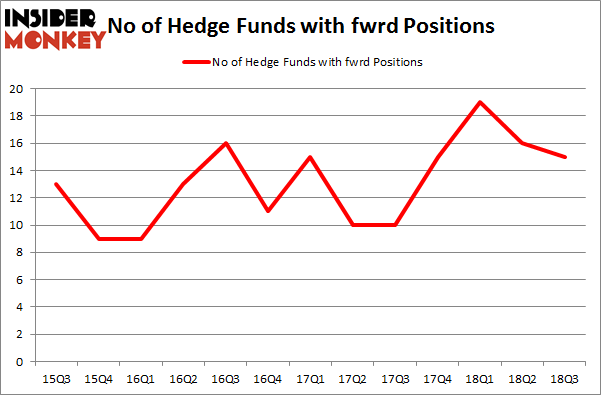 The largest stake in Forward Air Corporation (NASDAQ:FWRD) was held by Royce & Associates, which reported holding $67.7 million worth of stock at the end of September. It was followed by GLG Partners with a $15.6 million position. Other investors bullish on the company included Citadel Investment Group, Two Sigma Advisors, and PDT Partners.

Judging by the fact that Forward Air Corporation (NASDAQ:FWRD) has witnessed declining sentiment from the entirety of the hedge funds we track, logic holds that there lies a certain “tier” of funds that decided to sell off their positions entirely last quarter. Intriguingly, Alexander Mitchell’s Scopus Asset Management said goodbye to the largest investment of the “upper crust” of funds tracked by Insider Monkey, totaling an estimated $8.5 million in stock. David Brown’s fund, Hawk Ridge Management, also dumped its stock, about $7.6 million worth. These transactions are important to note, as aggregate hedge fund interest fell by 1 funds last quarter.

As you can see these stocks had an average of 14.25 hedge funds with bullish positions and the average amount invested in these stocks was $126 million. That figure was $101 million in FWRD’s case. Genworth Financial Inc (NYSE:GNW) is the most popular stock in this table. On the other hand Premier Financial Bancorp, Inc. (NASDAQ:PFBI) is the least popular one with only 4 bullish hedge fund positions. Forward Air Corporation (NASDAQ:FWRD) is not the most popular stock in this group but hedge fund interest is still above average. This is a slightly positive signal but we’d rather spend our time researching stocks that hedge funds are piling on. In this regard GNW might be a better candidate to consider a long position.