Today, Ford Motor Company (NYSE:F) stock’s strength can be attributed to the company’s success, rather than competitors’ difficulties. The U.S. housing market recovery has boosted demand for Ford’s F-Series pickups. Meanwhile, high fuel prices have encouraged U.S. consumers to replace their aging cars with more fuel-efficient models. Lastly, international trends are improving: Ford is gaining market share in China — the world’s largest auto market — and is implementing a decisive plan to return to profitability in Europe.

Domestic trends keep improving
In the depths of the Great Recession, U.S. auto sales plunged. In late 2008, Ford Motor Company (NYSE:F) stock dropped below $2, but unlike domestic rivals General Motors Company (NYSE:GM) and Chrysler, it was able to survive without a bailout. U.S. auto sales have bounced back in a big way since then. Whereas automakers sold just 10.4 million vehicles in the U.S. during 2009, the sales rate is on pace to surpass 15 million this year.

Improvement in the housing market and the fuel efficiency of Ford Motor Company (NYSE:F)’s “EcoBoost” engines have combined to drive strong sales growth for Ford’s highly profitable F-Series trucks. F-Series sales, which bottomed at just 413,625 in 2009, bounced back to 645,316 last year. Moreover, F-Series sales have grown by another 19% year to date. Ford’s next generation F-Series trucks will use lighter advanced materials to boost fuel efficiency without sacrificing power. If the company manages to deliver on this promise, it could solidify Ford’s leadership in the pickup segment.

Ford Motor Company (NYSE:F) is not resting on its laurels, either. While the F-Series trucks have been popular for decades, Ford is also rolling out new cars and crossovers to gain share in high-volume market segments. Last year, Ford introduced a redesigned Ford Escape crossover and a new, boldly styled Ford Fusion midsize car. By the end of 2013, monthly Fusion sales could challenge the longtime segment leaders: the Toyota Camry, the Honda Accord, and the Nissan Altima.

Strong demand and good pricing — combined with deep cuts made during the recession — have regularly allowed Ford to surpass a 10% operating margin in recent quarters. This was unheard of for an American automaker just two years ago. Last quarter, Ford posted a record pre-tax profit in North America of nearly $2.5 billion. This strong performance has helped drive Ford stock up from a low of less than $9 last summer to a 52-week high of $15.23 as of Monday morning. 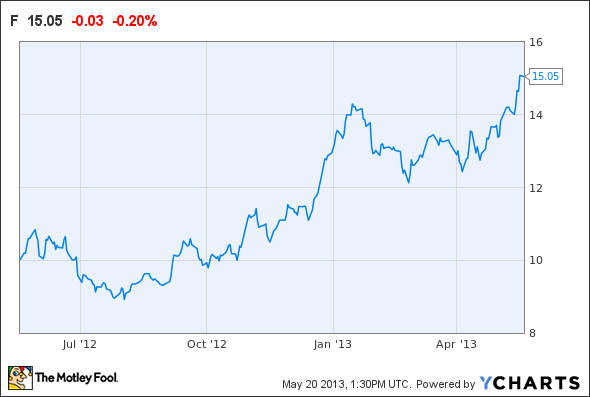 International markets will contribute
Realistically, shareholders cannot expect Ford’s domestic margins to improve beyond today’s historic highs. Furthermore, the 2013 U.S. auto sales pace is already nearly back to pre-recession levels, so growth is likely to be slower going forward. Ford stock therefore may be running out of domestic catalysts.

However, Ford stock is probably still a good buy for long-term investors, because the company is likely to achieve substantial improvements in its international profitability over the next few years. In Asia, Ford is running around break-even due to massive investments it is making in China and India. That masks very strong growth: Ford’s sales in China have jumped 49% year to date.

Today’s investments will enable higher sales in the future. By leveraging fixed costs, Ford China will become more profitable over the next two years. On Ford’s most recent earnings call, CEO Alan Mulally said that he expects China to be a major contributor to company profitability by mid-decade.