Is Fomento Económico Mexicano, S.A.B. de C.V. (NYSE:FMX) a good equity to bet on right now? We like to check what the smart money thinks first before doing extensive research. Although there have been several high profile failed hedge fund picks, the consensus picks among hedge fund investors have historically outperformed the market after adjusting for known risk attributes. It’s not surprising given that hedge funds have access to better information and more resources to find the latest market-moving information.

Hedge fund interest in Fomento Económico Mexicano, S.A.B. de C.V. (NYSE:FMX) shares was flat at the end of last quarter. This is usually a negative indicator. At the end of this article we will also compare FMX to other stocks including HSBC Holdings plc (NYSE:HSBC), The Walt Disney Company (NYSE:DIS), and Anheuser-Busch InBev SA/NV (NYSE:BUD) to get a better sense of its popularity.

To most investors, hedge funds are perceived as slow, old investment vehicles of yesteryear. While there are over 8,000 funds with their doors open today, Our researchers look at the moguls of this club, about 700 funds. Most estimates calculate that this group of people orchestrate bulk of the smart money’s total asset base, and by observing their top equity investments, Insider Monkey has figured out a few investment strategies that have historically surpassed the market. Insider Monkey’s flagship hedge fund strategy outrun the S&P 500 index by 6 percentage points per year since its inception in May 2014 through early November 2018. We were able to generate large returns even by identifying short candidates. Our portfolio of short stocks lost 24% since February 2017 (through December 3rd) even though the market was up nearly 23% during the same period. We just shared a list of 11 short targets in our latest quarterly update.

At the end of the third quarter, a total of 10 of the hedge funds tracked by Insider Monkey held long positions in this stock, representing no change from the second quarter of 2018. By comparison, 11 hedge funds held shares or bullish call options in FMX heading into this year. With the smart money’s positions undergoing their usual ebb and flow, there exists an “upper tier” of noteworthy hedge fund managers who were adding to their holdings considerably (or already accumulated large positions). 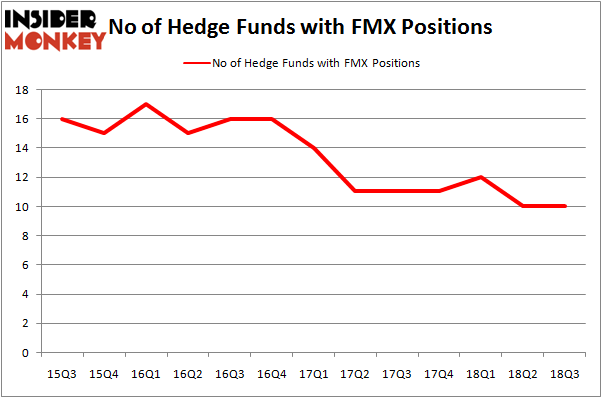 Among these funds, Gardner Russo & Gardner held the most valuable stake in Fomento Económico Mexicano, S.A.B. de C.V. (NYSE:FMX), which was worth $16.1 million at the end of the third quarter. On the second spot was Millennium Management which amassed $13.6 million worth of shares. Moreover, Arrowstreet Capital, Renaissance Technologies, and GAMCO Investors were also bullish on Fomento Económico Mexicano, S.A.B. de C.V. (NYSE:FMX), allocating a large percentage of their portfolios to this stock.

Because Fomento Económico Mexicano, S.A.B. de C.V. (NYSE:FMX) has witnessed a decline in interest from the aggregate hedge fund industry, logic holds that there were a few money managers who were dropping their full holdings last quarter. Interestingly, Ken Griffin’s Citadel Investment Group said goodbye to the largest stake of all the hedgies monitored by Insider Monkey, worth about $0.6 million in stock. Matthew Tewksbury’s fund, Stevens Capital Management, also sold off its stock, about $0.4 million worth. These moves are intriguing to say the least, as total hedge fund interest stayed the same (this is a bearish signal in our experience).

As you can see these stocks had an average of 36.25 hedge funds with bullish positions and the average amount invested in these stocks was $2.83 billion. That figure was $77 million in FMX’s case. The Walt Disney Company (NYSE:DIS) is the most popular stock in this table. On the other hand HSBC Holdings plc (NYSE:HSBC) is the least popular one with only 6 bullish hedge fund positions. Fomento Económico Mexicano, S.A.B. de C.V. (NYSE:FMX) is not the least popular stock in this group but hedge fund interest is still below average. This is a slightly negative signal and we’d rather spend our time researching stocks that hedge funds are piling on. In this regard DIS might be a better candidate to consider a long position.