Is Flowers Foods, Inc. (FLO) A Good Stock To Buy?

A market surge in the first quarter, spurred by easing global macroeconomic concerns and Powell’s pivot ended up having a positive impact on the markets and many hedge funds as a result. The stocks of smaller companies which were especially hard hit during the fourth quarter slightly outperformed the market during the first quarter. Unfortunately, Trump is unpredictable and volatility returned in the second quarter and smaller-cap stocks went back to selling off. We finished compiling the latest 13F filings to get an idea about what hedge funds are thinking about the overall market as well as individual stocks. In this article we will study the hedge fund sentiment to see how those concerns affected their ownership of Flowers Foods, Inc. (NYSE:FLO) during the quarter.

Flowers Foods, Inc. (NYSE:FLO) shareholders have witnessed a decrease in hedge fund sentiment in recent months. FLO was in 18 hedge funds’ portfolios at the end of the first quarter of 2019. There were 20 hedge funds in our database with FLO positions at the end of the previous quarter. Our calculations also showed that flo isn’t among the 30 most popular stocks among hedge funds.

In the 21st century investor’s toolkit there are several metrics investors have at their disposal to analyze stocks. A couple of the less utilized metrics are hedge fund and insider trading activity. We have shown that, historically, those who follow the best picks of the top fund managers can trounce the broader indices by a significant margin (see the details here).

What does the smart money think about Flowers Foods, Inc. (NYSE:FLO)?

Heading into the second quarter of 2019, a total of 18 of the hedge funds tracked by Insider Monkey held long positions in this stock, a change of -10% from the previous quarter. Below, you can check out the change in hedge fund sentiment towards FLO over the last 15 quarters. So, let’s find out which hedge funds were among the top holders of the stock and which hedge funds were making big moves. 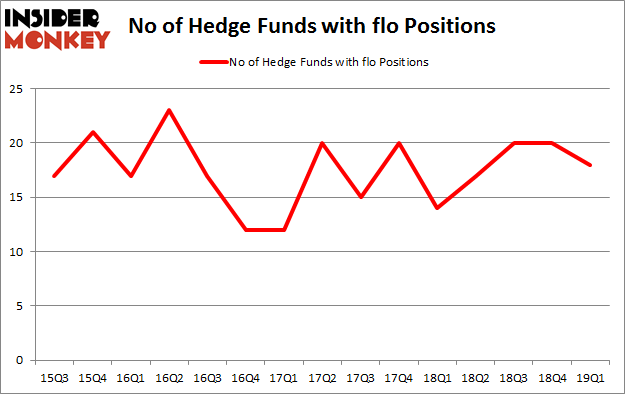 More specifically, Diamond Hill Capital was the largest shareholder of Flowers Foods, Inc. (NYSE:FLO), with a stake worth $65.8 million reported as of the end of March. Trailing Diamond Hill Capital was Renaissance Technologies, which amassed a stake valued at $51.3 million. GAMCO Investors, GLG Partners, and AQR Capital Management were also very fond of the stock, giving the stock large weights in their portfolios.

Since Flowers Foods, Inc. (NYSE:FLO) has faced bearish sentiment from hedge fund managers, we can see that there is a sect of money managers who were dropping their entire stakes last quarter. Interestingly, Israel Englander’s Millennium Management said goodbye to the biggest position of all the hedgies tracked by Insider Monkey, worth about $3 million in stock, and Gavin Saitowitz and Cisco J. del Valle’s Springbok Capital was right behind this move, as the fund said goodbye to about $1.2 million worth. These bearish behaviors are interesting, as total hedge fund interest dropped by 2 funds last quarter.

As you can see these stocks had an average of 16 hedge funds with bullish positions and the average amount invested in these stocks was $321 million. That figure was $190 million in FLO’s case. Mattel, Inc. (NASDAQ:MAT) is the most popular stock in this table. On the other hand First Industrial Realty Trust, Inc. (NYSE:FR) is the least popular one with only 11 bullish hedge fund positions. Flowers Foods, Inc. (NYSE:FLO) is not the most popular stock in this group but hedge fund interest is still above average. Our calculations showed that top 20 most popular stocks among hedge funds returned 1.9% in Q2 through May 30th and outperformed the S&P 500 ETF (SPY) by more than 3 percentage points. Hedge funds were also right about betting on FLO as the stock returned 4.4% during the same period and outperformed the market by an even larger margin. Hedge funds were rewarded for their relative bullishness.