Our extensive research has shown that imitating the smart money can generate significant returns for retail investors, which is why we track more than 700 prominent money managers and analyze their quarterly 13F filings. The stocks that are heavily bought by hedge funds historically outperformed the market, though there is no shortage of high profile failures like hedge funds’ recent losses in Facebook. Let’s take a closer look at what the funds we track think about Flagstar Bancorp Inc (NYSE:FBC) in this article.

Is Flagstar Bancorp Inc (NYSE:FBC) a great investment right now? Hedge funds are reducing their bets on the stock. The number of bullish hedge fund bets retreated by 6 lately. Our calculations also showed that fbc isn’t among the 30 most popular stocks among hedge funds. FBC was in 15 hedge funds’ portfolios at the end of September. There were 21 hedge funds in our database with FBC holdings at the end of the previous quarter.

What have hedge funds been doing with Flagstar Bancorp Inc (NYSE:FBC)?

At the end of the third quarter, a total of 15 of the hedge funds tracked by Insider Monkey were bullish on this stock, a change of -29% from the previous quarter. Below, you can check out the change in hedge fund sentiment towards FBC over the last 13 quarters. So, let’s examine which hedge funds were among the top holders of the stock and which hedge funds were making big moves. 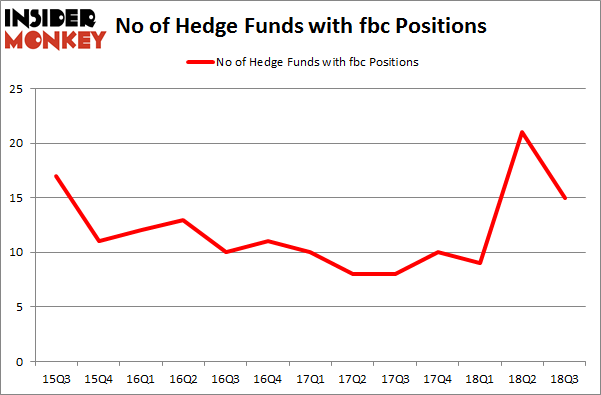 The largest stake in Flagstar Bancorp Inc (NYSE:FBC) was held by EJF Capital, which reported holding $52.6 million worth of stock at the end of September. It was followed by Basswood Capital with a $41.5 million position. Other investors bullish on the company included Renaissance Technologies, Millennium Management, and D E Shaw.

Since Flagstar Bancorp Inc (NYSE:FBC) has faced bearish sentiment from the aggregate hedge fund industry, logic holds that there is a sect of money managers who were dropping their entire stakes in the third quarter. Intriguingly, Gregg Moskowitz’s Interval Partners dumped the largest position of all the hedgies tracked by Insider Monkey, valued at close to $4.8 million in stock, and Glenn Russell Dubin’s Highbridge Capital Management was right behind this move, as the fund cut about $4.8 million worth. These bearish behaviors are intriguing to say the least, as aggregate hedge fund interest dropped by 6 funds in the third quarter.

As you can see these stocks had an average of 9.5 hedge funds with bullish positions and the average amount invested in these stocks was $87 million. That figure was $168 million in FBC’s case. Kaiser Aluminum Corp. (NASDAQ:KALU) is the most popular stock in this table. On the other hand Hailiang Education Group Inc. (NASDAQ:HLG) is the least popular one with only 4 bullish hedge fund positions. Flagstar Bancorp Inc (NYSE:FBC) is not the most popular stock in this group but hedge fund interest is still above average. This is a slightly positive signal but we’d rather spend our time researching stocks that hedge funds are piling on. In this regard KALU might be a better candidate to consider a long position.