Is Five Point Holdings (FPH) A Good Stock To Buy?

At Insider Monkey, we pore over the filings of more than 700 top investment firms every quarter, a process we have now completed for the latest reporting period. The data we’ve gathered as a result gives us access to a wealth of collective knowledge based on these firms’ portfolio holdings as of September 30. In this article, we will use that wealth of knowledge to determine whether or not Five Point Holdings, LLC (NYSE:FPH) makes for a good investment right now.

Five Point Holdings, LLC (NYSE:FPH) investors should be aware of a decrease in hedge fund interest recently. FPH was in 12 hedge funds’ portfolios at the end of the third quarter of 2018. There were 14 hedge funds in our database with FPH positions at the end of the previous quarter. Our calculations also showed that FPH isn’t among the 30 most popular stocks among hedge funds.

What have hedge funds been doing with Five Point Holdings, LLC (NYSE:FPH)? 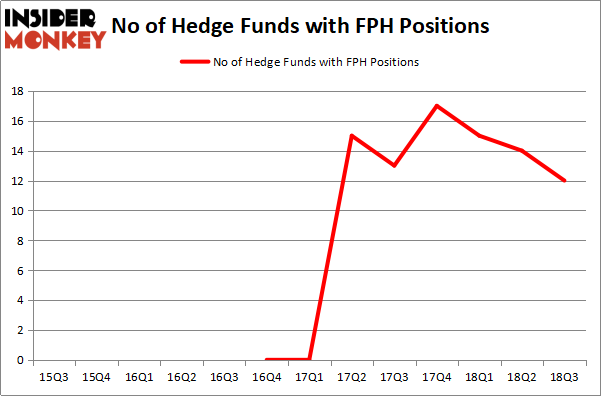 Of the funds tracked by Insider Monkey, Martin Whitman’s Third Avenue Management has the most valuable position in Five Point Holdings, LLC (NYSE:FPH), worth close to $96.2 million, comprising 5.4% of its total 13F portfolio. The second most bullish fund manager is Kevin Michael Ulrich and Anthony Davis of Anchorage Advisors, with a $92.9 million position; the fund has 0.6% of its 13F portfolio invested in the stock. Some other members of the smart money with similar optimism contain John Khoury’s Long Pond Capital, Matthew Barrett’s Glendon Capital Management and Michael Blitzer’s Kingstown Capital Management.

Judging by the fact that Five Point Holdings, LLC (NYSE:FPH) has experienced declining sentiment from the smart money, logic holds that there lies a certain “tier” of hedge funds that decided to sell off their positions entirely by the end of the third quarter. Intriguingly, Wayne Cooperman’s Cobalt Capital Management dumped the biggest position of all the hedgies monitored by Insider Monkey, comprising about $5.8 million in stock, and Noam Gottesman’s GLG Partners was right behind this move, as the fund dumped about $0.6 million worth. These moves are intriguing to say the least, as aggregate hedge fund interest fell by 2 funds by the end of the third quarter.

As you can see these stocks had an average of 14.25 hedge funds with bullish positions and the average amount invested in these stocks was $267 million. That figure was $294 million in FPH’s case. Hertz Global Holdings, Inc. (NYSE:HTZ) is the most popular stock in this table. On the other hand 1st Source Corporation (NASDAQ:SRCE) is the least popular one with only 8 bullish hedge fund positions. Five Point Holdings, LLC (NYSE:FPH) is not the least popular stock in this group but hedge fund interest is still below average. This is a slightly negative signal and we’d rather spend our time researching stocks that hedge funds are piling on. In this regard HTZ might be a better candidate to consider a long position.