Is Five Below Inc (FIVE) A Good Stock To Buy?

A market correction in the fourth quarter, spurred by a number of global macroeconomic concerns and rising interest rates ended up having a negative impact on the markets and many hedge funds as a result. The stocks of smaller companies were especially hard hit during this time as investors fled to investments seen as being safer. This is evident in the fact that the Russell 2000 ETF underperformed the S&P 500 ETF by 4 percentage points during the first half of the fourth quarter. We also received indications that hedge funds were trimming their positions amid the market volatility and uncertainty, and given their greater inclination towards smaller cap stocks than other investors, it follows that a stronger sell-off occurred in those stocks. Let’s study the hedge fund sentiment to see how those concerns affected their ownership of Five Below Inc (NASDAQ:FIVE) during the quarter.

Five Below Inc (NASDAQ:FIVE) has experienced a decrease in activity from the world’s largest hedge funds in recent months. FIVE was in 26 hedge funds’ portfolios at the end of September. There were 27 hedge funds in our database with FIVE positions at the end of the previous quarter. Our calculations also showed that five isn’t among the 30 most popular stocks among hedge funds.

At the moment there are several tools shareholders put to use to evaluate their holdings. Two of the most underrated tools are hedge fund and insider trading sentiment. Our experts have shown that, historically, those who follow the top picks of the top hedge fund managers can outclass their index-focused peers by a solid amount (see the details here).

Let’s take a glance at the new hedge fund action regarding Five Below Inc (NASDAQ:FIVE).

At the end of the third quarter, a total of 26 of the hedge funds tracked by Insider Monkey were long this stock, a change of -4% from the previous quarter. By comparison, 21 hedge funds held shares or bullish call options in FIVE heading into this year. With hedge funds’ positions undergoing their usual ebb and flow, there exists a few noteworthy hedge fund managers who were upping their holdings considerably (or already accumulated large positions). 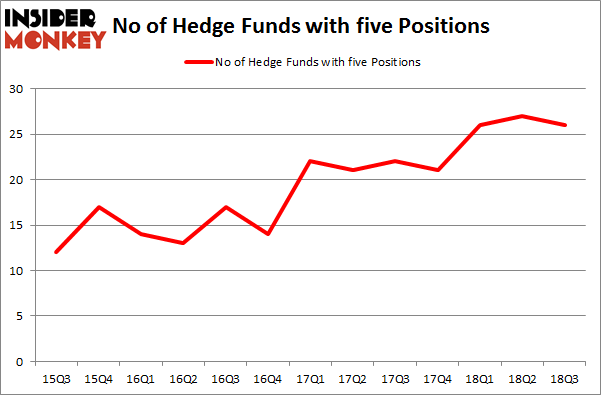 The largest stake in Five Below Inc (NASDAQ:FIVE) was held by Renaissance Technologies, which reported holding $127 million worth of stock at the end of September. It was followed by Two Sigma Advisors with a $108.3 million position. Other investors bullish on the company included Citadel Investment Group, Pacifica Capital Investments, and Buckingham Capital Management.

Since Five Below Inc (NASDAQ:FIVE) has experienced a decline in interest from the smart money, we can see that there is a sect of hedgies that elected to cut their full holdings heading into Q3. Interestingly, D. E. Shaw’s D E Shaw dumped the biggest investment of the 700 funds tracked by Insider Monkey, worth an estimated $34 million in stock, and Steve Cohen’s Point72 Asset Management was right behind this move, as the fund dumped about $8.2 million worth. These moves are intriguing to say the least, as aggregate hedge fund interest fell by 1 funds heading into Q3.

Let’s now take a look at hedge fund activity in other stocks – not necessarily in the same industry as Five Below Inc (NASDAQ:FIVE) but similarly valued. These stocks are OGE Energy Corp. (NYSE:OGE), Santander Consumer USA Holdings Inc (NYSE:SC), Kilroy Realty Corp (NYSE:KRC), and The Middleby Corporation (NASDAQ:MIDD). This group of stocks’ market values are similar to FIVE’s market value.

As you can see these stocks had an average of 18.5 hedge funds with bullish positions and the average amount invested in these stocks was $456 million. That figure was $413 million in FIVE’s case. Santander Consumer USA Holdings Inc (NYSE:SC) is the most popular stock in this table. On the other hand Kilroy Realty Corp (NYSE:KRC) is the least popular one with only 12 bullish hedge fund positions. Five Below Inc (NASDAQ:FIVE) is not the most popular stock in this group but hedge fund interest is still above average. This is a slightly positive signal but we’d rather spend our time researching stocks that hedge funds are piling on. In this regard SC might be a better candidate to consider a long position.

Incandescent Capital Gives Its View on Heritage Insurance
Monthly Newsletter Strategy
Download a free copy of our newsletter and see the details inside!
Hedge Fund Resource Center
Related News
Is Five Below Inc (FIVE) a Good Stock To Buy? Salesforce, Box, Infoblox, And 2 More Report Earnings: What You Need To Know Gaming Stocks Dominate List of 10 Nasdaq Stocks That Hit Their 52-Week Highs Tuesday Pacifica Capital Investments’ Top Stock Picks Lead Into Q2 by Warren Buffett’s Holding Company Why Are These Five Stocks in Green on Friday? Is Five Below Inc (FIVE) Going to Burn These Hedge Funds? Corporate Insiders Point to Three Stocks Poised to Explode The 10 Best Islands to Visit in 2019 5 Most Socially Responsible Companies in America 5 Ways You Can Eliminate Credit Card Debt
Billionaire Hedge Funds