Before we spend days researching a stock idea we’d like to take a look at how hedge funds and billionaire investors recently traded that stock. S&P 500 Index ETF (SPY) lost 8.7% through October 26th. Forty percent of the S&P 500 constituents were down more than 10%. The average return of a randomly picked stock in the index is -9.5%. This means you (or a monkey throwing a dart) have less than an even chance of beating the market by randomly picking a stock. On the other hand, the top 25 most popular S&P 500 stocks among hedge funds had an average loss of 8.8%. In this article, we will take a look at what hedge funds think about First Solar, Inc. (NASDAQ:FSLR).

First Solar, Inc. (NASDAQ:FSLR) has seen a decrease in support from the world’s most elite money managers of late. Our calculations also showed that FSLR isn’t among the 30 most popular stocks among hedge funds.

In the eyes of most stock holders, hedge funds are seen as unimportant, old financial tools of the past. While there are over 8,000 funds in operation at the moment, We choose to focus on the top tier of this group, approximately 700 funds. These investment experts administer most of the hedge fund industry’s total capital, and by keeping an eye on their finest investments, Insider Monkey has come up with numerous investment strategies that have historically outpaced the S&P 500 index. Insider Monkey’s flagship hedge fund strategy outrun the S&P 500 index by 6 percentage points annually since its inception in May 2014 through early November 2018. We were able to generate large returns even by identifying short candidates. Our portfolio of short stocks lost 24% since February 2017 (through December 3rd) even though the market was up nearly 23% during the same period. We just shared a list of 11 short targets in our latest quarterly update.

How have hedgies been trading First Solar, Inc. (NASDAQ:FSLR)?

Heading into the fourth quarter of 2018, a total of 14 of the hedge funds tracked by Insider Monkey were long this stock, a change of -39% from the previous quarter. By comparison, 27 hedge funds held shares or bullish call options in FSLR heading into this year. With the smart money’s positions undergoing their usual ebb and flow, there exists an “upper tier” of noteworthy hedge fund managers who were boosting their stakes significantly (or already accumulated large positions). 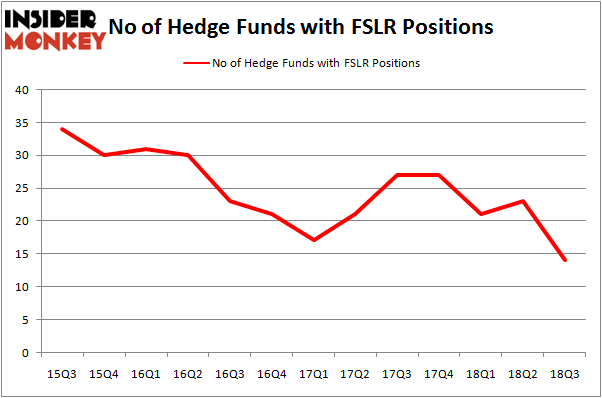 More specifically, AQR Capital Management was the largest shareholder of First Solar, Inc. (NASDAQ:FSLR), with a stake worth $94.6 million reported as of the end of September. Trailing AQR Capital Management was Citadel Investment Group, which amassed a stake valued at $63.6 million. Luminus Management, Two Sigma Advisors, and Citadel Investment Group were also very fond of the stock, giving the stock large weights in their portfolios.

Judging by the fact that First Solar, Inc. (NASDAQ:FSLR) has witnessed a decline in interest from the aggregate hedge fund industry, it’s safe to say that there exists a select few hedgies that decided to sell off their positions entirely heading into Q3. Intriguingly, Mike Masters’s Masters Capital Management dropped the largest position of all the hedgies followed by Insider Monkey, comprising an estimated $78.2 million in stock, and Noam Gottesman’s GLG Partners was right behind this move, as the fund sold off about $28.4 million worth. These transactions are intriguing to say the least, as total hedge fund interest fell by 9 funds heading into Q3.

As you can see these stocks had an average of 16.75 hedge funds with bullish positions and the average amount invested in these stocks was $276 million. That figure was $294 million in FSLR’s case. MDU Resources Group Inc (NYSE:MDU) is the most popular stock in this table. On the other hand Empire State Realty Trust Inc (NYSE:ESRT) is the least popular one with only 13 bullish hedge fund positions. First Solar, Inc. (NASDAQ:FSLR) is not the least popular stock in this group but hedge fund interest is still below average. This is a slightly negative signal and we’d rather spend our time researching stocks that hedge funds are piling on. In this regard MDU might be a better candidate to consider a long position.