The successful funds run by legendary investors such as Dan Loeb and David Tepper make hundreds of millions of dollars for themselves and their investors by spending enormous resources doing research on small cap stocks that big investment banks don’t follow. Because of their pay structures, they have strong incentive to do the research necessary to beat the market. That’s why we pay close attention to what they think in small cap stocks. In this article, we take a closer look at First NBC Bank Holding Company (NASDAQ:FNBC) from the perspective of those successful funds.

Hedge fund interest in First NBC Bank Holding Company (NASDAQ:FNBC) shares was flat at the end of last quarter. This is usually a negative indicator. The level and the change in hedge fund popularity aren’t the only variables you need to analyze to decipher hedge funds’ perspectives. A stock may witness a boost in popularity but it may still be less popular than similarly priced stocks. That’s why at the end of this article we will examine companies such as Skullcandy Inc (NASDAQ:SKUL), Codexis, Inc. (NASDAQ:CDXS), and FuelCell Energy, Inc. (NASDAQ:FCEL) to gather more data points.

With all of this in mind, we’re going to take a peek at the fresh action encompassing First NBC Bank Holding Company (NASDAQ:FNBC).

What does the smart money think about First NBC Bank Holding Company (NASDAQ:FNBC)?

At Q3’s end, a total of 12 of the hedge funds tracked by Insider Monkey were long this stock, unchanged from the second quarter of 2016. Below, you can check out the change in hedge fund sentiment towards FNBC over the last 5 quarters. With hedge funds’ sentiment swirling, there exists a few noteworthy hedge fund managers who were increasing their stakes significantly (or already accumulated large positions). 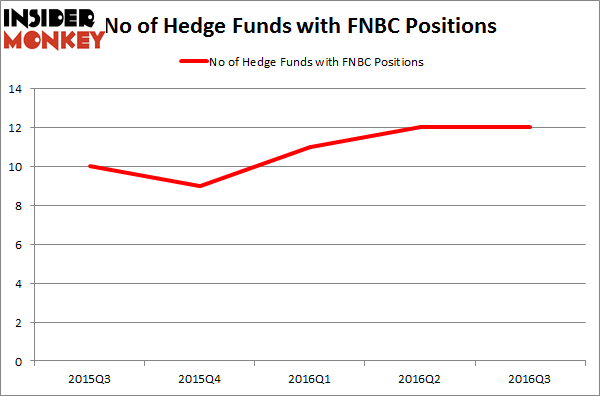 According to Insider Monkey’s hedge fund database, Millennium Management, one of the 10 largest hedge funds in the world, holds the most valuable position in First NBC Bank Holding Company (NASDAQ:FNBC). Millennium Management has a $5.3 million position in the stock, comprising less than 0.1% of its 13F portfolio. Coming in second is Cliff Asness’ AQR Capital Management, with a $3.8 million position; the fund has less than 0.1% of its 13F portfolio invested in the stock. Remaining peers with similar optimism include William Black’s Consector Capital, Ken Griffin’s Citadel Investment Group, and Jim Simons’ Renaissance Technologies. We should note that none of these hedge funds are among our list of the 100 best performing hedge funds which is based on the performance of their 13F long positions in non-microcap stocks.

Now that we’ve mentioned the most bullish investors, let’s also take a look at some funds that cut their entire stakes in the stock during the third quarter. At the top of the heap, Amy Minella’s Cardinal Capital cut the biggest stake of all the investors watched by Insider Monkey, comprising close to $9.9 million in stock, and Peter Algert and Kevin Coldiron’s Algert Coldiron Investors was right behind this move, as the fund sold off about $0.5 million worth of shares.

As you can see these stocks had an average of five funds with bullish positions and the average amount invested in these stocks was $12 million. That figure was $19 million in FNBC’s case. Skullcandy Inc (NASDAQ:SKUL) is the most popular stock in this table. On the other hand LCNB Corp. (NASDAQ:LCNB) is the least popular one with only two bullish hedge fund positions. Compared to these stocks First NBC Bank Holding Company (NASDAQ:FNBC) is more popular among hedge funds. Considering that hedge funds are fond of this stock in relation to its market cap peers, it may be a good idea to analyze it in detail and potentially include it in your portfolio.