Is First Data Corporation (FDC) A Good Stock To Buy?

Is First Data Corporation (NYSE:FDC) a good bet right now? We like to analyze hedge fund sentiment before doing days of in-depth research. We do so because hedge funds and other elite investors have numerous Ivy league graduates, expert network advisers, and supply chain tipsters working or consulting for them. There is not a shortage of news stories covering failed hedge fund investments and it is a fact that hedge funds’ picks don’t beat the market 100% of the time, but their consensus picks have historically done very well and have outperformed the market after adjusting for risk.

First Data Corporation (NYSE:FDC) shareholders have witnessed an increase in hedge fund interest in recent months. FDC was in 61 hedge funds’ portfolios at the end of the third quarter of 2018. There were 49 hedge funds in our database with FDC holdings at the end of the previous quarter. Our calculations also showed that FDC isn’t among the 30 most popular stocks among hedge funds.

If you’d ask most shareholders, hedge funds are viewed as underperforming, outdated investment vehicles of years past. While there are over 8,000 funds trading today, We choose to focus on the top tier of this group, around 700 funds. It is estimated that this group of investors handle the lion’s share of the smart money’s total capital, and by keeping track of their unrivaled equity investments, Insider Monkey has come up with a number of investment strategies that have historically outrun the broader indices. Insider Monkey’s flagship hedge fund strategy outperformed the S&P 500 index by 6 percentage points a year since its inception in May 2014 through early November 2018. We were able to generate large returns even by identifying short candidates. Our portfolio of short stocks lost 24% since February 2017 (through December 3rd) even though the market was up nearly 23% during the same period. We just shared a list of 11 short targets in our latest quarterly update.

How have hedgies been trading First Data Corporation (NYSE:FDC)? 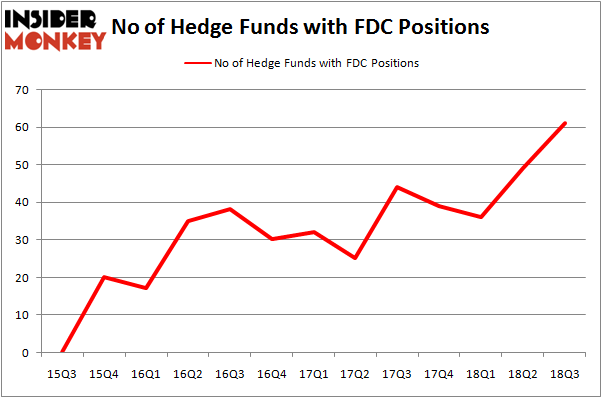 More specifically, Glenview Capital was the largest shareholder of First Data Corporation (NYSE:FDC), with a stake worth $538.5 million reported as of the end of September. Trailing Glenview Capital was Lone Pine Capital, which amassed a stake valued at $536.2 million. Citadel Investment Group, Steadfast Capital Management, and Melvin Capital Management were also very fond of the stock, giving the stock large weights in their portfolios.

As aggregate interest increased, some big names were breaking ground themselves. Lone Pine Capital, managed by Stephen Mandel, created the biggest position in First Data Corporation (NYSE:FDC). Lone Pine Capital had $536.2 million invested in the company at the end of the quarter. Bain Capital’s Brookside Capital also made a $68.3 million investment in the stock during the quarter. The other funds with brand new FDC positions are Roberto Mignone’s Bridger Management, Alexander Mitchell’s Scopus Asset Management, and Joe DiMenna’s ZWEIG DIMENNA PARTNERS.

As you can see these stocks had an average of 33.5 hedge funds with bullish positions and the average amount invested in these stocks was $1.93 billion. That figure was $3.9 billion in FDC’s case. Agilent Technologies Inc. (NYSE:A) is the most popular stock in this table. On the other hand Atlassian Corporation Plc (NASDAQ:TEAM) is the least popular one with only 28 bullish hedge fund positions. Compared to these stocks First Data Corporation (NYSE:FDC) is more popular among hedge funds. Considering that hedge funds are fond of this stock in relation to its market cap peers, it may be a good idea to analyze it in detail and potentially include it in your portfolio.