Is First Bancorp (FBP) A Good Stock To Buy?

Before we spend days researching a stock idea we’d like to take a look at how hedge funds and billionaire investors recently traded that stock. S&P 500 Index ETF (SPY) lost 8.7% through October 26th. Forty percent of the S&P 500 constituents were down more than 10%. The average return of a randomly picked stock in the index is -9.5%. This means you (or a monkey throwing a dart) have less than an even chance of beating the market by randomly picking a stock. On the other hand, the top 25 most popular S&P 500 stocks among hedge funds had an average loss of 8.8%. In this article, we will take a look at what hedge funds think about First Bancorp (NYSE:FBP).

Is First Bancorp (NYSE:FBP) a splendid stock to buy now? Money managers are in an optimistic mood. The number of long hedge fund positions increased by 2 recently. Our calculations also showed that FBP isn’t among the 30 most popular stocks among hedge funds.

At Q3’s end, a total of 18 of the hedge funds tracked by Insider Monkey were long this stock, a change of 13% from the second quarter of 2018. The graph below displays the number of hedge funds with bullish position in FBP over the last 13 quarters. With the smart money’s positions undergoing their usual ebb and flow, there exists a few noteworthy hedge fund managers who were adding to their stakes considerably (or already accumulated large positions). 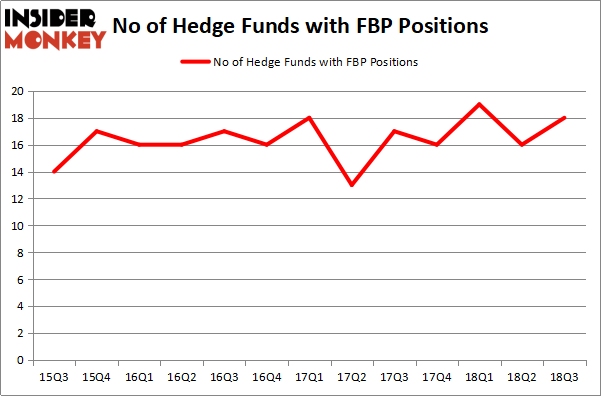 More specifically, EJF Capital was the largest shareholder of First Bancorp (NYSE:FBP), with a stake worth $68.6 million reported as of the end of September. Trailing EJF Capital was Moore Global Investments, which amassed a stake valued at $37.6 million. Alyeska Investment Group, D E Shaw, and Two Sigma Advisors were also very fond of the stock, giving the stock large weights in their portfolios.

Now, some big names have jumped into First Bancorp (NYSE:FBP) headfirst. Citadel Investment Group, managed by Ken Griffin, established the largest position in First Bancorp (NYSE:FBP). Citadel Investment Group had $4.1 million invested in the company at the end of the quarter. Mike Vranos’s Ellington also initiated a $1 million position during the quarter. The only other fund with a brand new FBP position is Andrew Feldstein and Stephen Siderow’s Blue Mountain Capital.

As you can see these stocks had an average of 14.25 hedge funds with bullish positions and the average amount invested in these stocks was $216 million. That figure was $257 million in FBP’s case. Pinnacle Entertainment, Inc (NYSE:PNK) is the most popular stock in this table. On the other hand BP Midstream Partners LP (NYSE:BPMP) is the least popular one with only 4 bullish hedge fund positions. First Bancorp (NYSE:FBP) is not the most popular stock in this group but hedge fund interest is still above average. This is a slightly positive signal but we’d rather spend our time researching stocks that hedge funds are piling on. In this regard PNK might be a better candidate to consider a long position.