Is Federated Investors Inc (FII) A Good Stock To Buy?

We can judge whether Federated Investors Inc (NYSE:FII) is a good investment right now by following the lead of some of the best investors in the world and piggybacking their ideas. There’s no better way to get these firms’ immense resources and analytical capabilities working for us than to follow their lead into their best ideas. While not all of these picks will be winners, research shows that these picks historically outperformed the market when we factor in known risk factors.

Is Federated Investors Inc (NYSE:FII) a buy here? The smart money is taking a bearish view. The number of bullish hedge fund positions were trimmed by 4 lately. Our calculations also showed that fii isn’t among the 30 most popular stocks among hedge funds. FII was in 15 hedge funds’ portfolios at the end of the third quarter of 2018. There were 19 hedge funds in our database with FII positions at the end of the previous quarter. 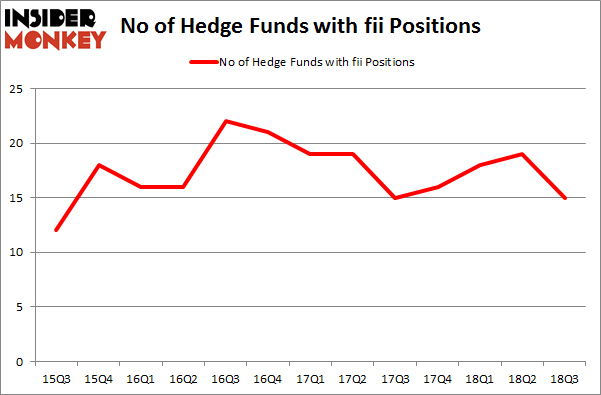 Because Federated Investors Inc (NYSE:FII) has witnessed a decline in interest from the entirety of the hedge funds we track, it’s safe to say that there were a few money managers that elected to cut their positions entirely in the third quarter. At the top of the heap, Benjamin A. Smith’s Laurion Capital Management dumped the biggest stake of the “upper crust” of funds watched by Insider Monkey, valued at close to $2.3 million in stock. Roger Ibbotson’s fund, Zebra Capital Management, also cut its stock, about $0.9 million worth. These moves are intriguing to say the least, as aggregate hedge fund interest fell by 4 funds in the third quarter.

As you can see these stocks had an average of 12 hedge funds with bullish positions and the average amount invested in these stocks was $124 million. That figure was $143 million in FII’s case. Reata Pharmaceuticals, Inc. (NASDAQ:RETA) is the most popular stock in this table. On the other hand WesBanco, Inc. (NASDAQ:WSBC) is the least popular one with only 9 bullish hedge fund positions. Federated Investors Inc (NYSE:FII) is not the most popular stock in this group but hedge fund interest is still above average. This is a slightly positive signal but we’d rather spend our time researching stocks that hedge funds are piling on. In this regard RETA might be a better candidate to consider a long position.