Is Facebook, Inc. (FB) A Good Stock To Buy Even Though Hedge Funds Are Dumping?

The fourth quarter was a rough one for most investors, as fears of a rising interest rate environment in the U.S, a trade war with China, and a more or less stagnant Europe, weighed heavily on the minds of investors. Both the S&P 500 and Russell 2000 sank as a result, with the Russell 2000, which is composed of smaller companies, being hit especially hard. This was primarily due to hedge funds, which are big supporters of small-cap stocks, pulling some of their capital out of the volatile markets during this time. Let’s look at how this market volatility affected the sentiment of hedge funds towards Facebook, Inc. (NASDAQ:FB), and what that likely means for the prospects of the company and its stock.

Facebook, Inc. (NASDAQ:FB) was in 164 hedge funds’ portfolios at the end of the third quarter of 2018. FB shareholders have witnessed a sharp decrease in activity from the world’s largest hedge funds lately. There were 193 hedge funds in our database with FB holdings at the end of the previous quarter. Nevertheless, Facebook was still the second most popular stock among hedge funds (check out the list of 30 most popular stocks among hedge funds now). Billionaire hedge fund managers were slightly less bullish as Facebook ranked #3 in the list of 30 stocks billionaires are crazy about.

To most investors, hedge funds are viewed as underperforming, old investment tools of years past. While there are greater than 8000 funds trading today, Our researchers hone in on the elite of this group, approximately 700 funds. These investment experts preside over bulk of the hedge fund industry’s total asset base, and by keeping track of their matchless equity investments, Insider Monkey has found various investment strategies that have historically defeated the market. Insider Monkey’s flagship hedge fund strategy outrun the S&P 500 index by 6 percentage points per year since its inception in May 2014 through early November 2018. We were able to generate large returns even by identifying short candidates. Our portfolio of short stocks lost 26.1% since February 2017 even though the market was up nearly 19% during the same period. We just shared a list of 11 short targets in our latest quarterly update. 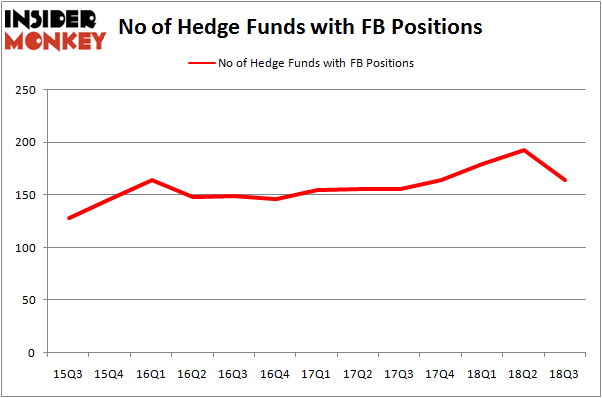 Due to the fact that Facebook, Inc. (NASDAQ:FB) has witnessed a decline in interest from hedge fund managers, it’s safe to say that there was a specific group of fund managers who sold off their entire stakes heading into Q3. At the top of the heap, Dan Loeb’s Third Point dropped the biggest investment of the “upper crust” of funds followed by Insider Monkey, valued at close to $583 million in stock, and John Armitage’s Egerton Capital Limited was right behind this move, as the fund dropped about $438 million worth. These transactions are interesting, as aggregate hedge fund interest dropped by 29 funds heading into Q3. The value of hedge funds’ Facebook positions went down from $25.3 billion at the end of June to $16.6 billion at the end of September.

As you can see these stocks had an average of 85.5 hedge funds with bullish positions and the average amount invested in these stocks was $8.4 billion. That figure was $16.6 billion in FB’s case. Alibaba Group Holding Ltd (NYSE:BABA) is the most popular stock in this table. On the other hand Exxon Mobil Corporation (NYSE:XOM) is the least popular one with only 53 bullish hedge fund positions. Compared to these stocks Facebook, Inc. (NASDAQ:FB) is more popular among hedge funds.

Facebook shares continued their decline in Q4 and currently has a market cap of only $400 billion. Facebook and Google dominate online advertising. Facebook’s forward P/E ratio excluding cash is less than 18 whereas other growth stocks are twice as expensive. Johnson & Johnson (JNJ), a  low growth stock, trades at a similar valuation. We believe Facebook is a better bet; its current stock price is depressed due to bad publicity and it presents a long-term buying opportunity.

Hedge Funds Are Buying United Technologies Corporation (UTX) Ahead of Potential...
Monthly Newsletter Strategy
Download a free copy of our newsletter and see the details inside!
Hedge Fund Resource Center
Related News
5 Stocks Hedge Funds Can’t Live Without As 13F Deadline Looms 5 Stocks Early Hedge Fund 13F Filers Love The Most Facebook, Google, Amazon, and More: Why These Stocks Are in the Spotlight How Do Hedge Funds Feel About Facebook Inc (NASDAQ:FB)? 25 Most Popular Stocks Among Hedge Funds in 2018 Melvin Capital Management’s Returns, AUM, and Holdings What??? Are Hedge Fund Hotels Really Getting Liquidated? 5 Ways You Can Eliminate Credit Card Debt 10 Easiest Road Test Sites in NY and NJ 10 Hottest Selling Products in the USA in 2018
Billionaire Hedge Funds