Out of thousands of stocks that are currently traded on the market, it is difficult to determine those that can really generate strong returns. Hedge funds and institutional investors spend millions of dollars on analysts with MBAs and PhDs, who are industry experts and well connected to other industry and media insiders on top of that. Individual investors can piggyback the hedge funds employing these talents and can benefit from their vast resources and knowledge in that way. We analyze quarterly 13F filings of over 700 hedge funds and, by looking at the smart money sentiment that surrounds a stock, we can determine whether it has potential to beat the market over the long-term. Therefore, let’s take a closer look at what smart money thinks about Exact Sciences Corporation (NASDAQ:EXAS).

Is Exact Sciences Corporation (NASDAQ:EXAS) ready to rally soon? Hedge funds are in an optimistic mood. The number of bullish hedge fund positions advanced by 2 lately, and the company was in 33 hedge funds’ portfolios at the end of the third quarter of 2018. Still, that number was not enough to place it among 30 most popular stocks among hedge funds in Q3 of 2018. But, just because the stock wasn’t one of the favorites in the third quarter, that doesn’t necessarily mean you shouldn’t consider it for your portfolio. That is why, in this article, we are going to carefully examine Exact Sciences Corporation.

While researching to gather more information on Exact Sciences Corporation (NASDAQ:EXAS), we found River Park Large Growth Fund’s Third Quarter 2018 Performance Summary, in which it also talks about this company’s latest business moves, and its views on it.

“Exact Sciences: EXAS shares had a strong advance for the quarter as the company announced a marketing and promotion partnership with Pfizer for its Cologuard cancer screening test and analysts consistently increased both near and long term profit forecasts for the company as they digested the new deal. We view the partnership with Pfizer as a game-changer for Exact that should materially accelerate the adoption of Cologuard as a standard of care in the $13 billion colon cancer screening test market. The agreement provides for marketing support from Pfizer of over $20 million and about 1,000 Pfizer field sales representatives (on top of EXAS’s 500 sales reps today) selling Cologuard. At the time of the announcement, the company also provided future baseline revenue targets for the next three years that were above the then current Street consensus. This agreement alleviated a key concern on the Street regarding sales execution and account penetration for Cologuard and led to several analyst upgrades, as well as a swift re-rating of the company’s shares.

Colorectal cancer (CRC) is the second leading cause of cancer deaths in the US and the leading cause of cancer deaths in the US among non-smokers. EXAS’ Cologuard was FDA-approved in 2014, has been added to several colon screening guidelines, was approved for reimbursement by Centers for Medicare and Medicaid (the government payer known as CMS) and is now covered by 90% of private insurers. Of the screening test options for the 85 million people in the average risk population that should be screened, Cologuard is more accurate than the current blood test option (FIT), and as accurate as a colonoscopy, while less expensive and less invasive. After it became commercially viable and broadly reimbursable, Cologuard tests completed have grown quickly from 4,000 in 1Q15 to 215,000 in 2Q18 (with over 900,000 projected for all of 2018, up nearly 4x in the last 2 years).

We believe that test and revenue growth, especially in light of the new Pfizer partnership, should continue to be robust as Cologuard increasingly becomes a standard of care, and we expect a greater than 40% revenue CAGR over the next few years. As the business scales, we project upwards of 80% gross margins (from 75% last quarter, up 1,000 bps year-over-year), and a greater-than 25% operating margin (from negative today).”

In spite of RiverPark’s enthusiasm for this stock, we are still not convinced, which is why we’ll take a peek at the key hedge fund action surrounding Exact Sciences Corporation (NASDAQ:EXAS). 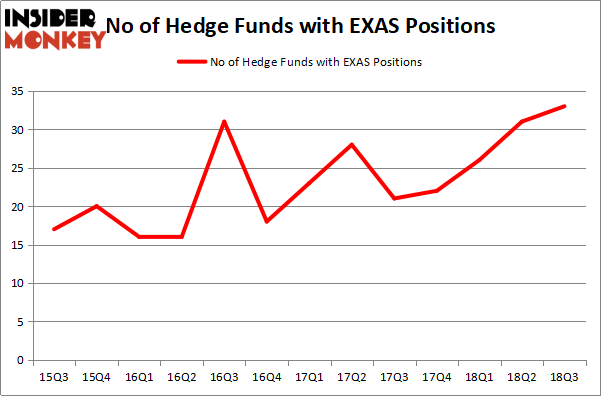 Among these funds, Viking Global held the most valuable stake in Exact Sciences Corporation (NASDAQ:EXAS), which was worth $102.2 million at the end of the third quarter. On the second spot was D E Shaw which amassed $101.1 million worth of shares. Moreover, JANA Partners, Hitchwood Capital Management, and Millennium Management were also bullish on Exact Sciences Corporation (NASDAQ:EXAS), allocating a large percentage of their portfolios to this stock.

As you can see these stocks had an average of 21 hedge funds with bullish positions and the average amount invested in these stocks was $631 million. That figure was $625 million in EXAS’ case. Qorvo, Inc. (NASDAQ:QRVO) is the most popular stock in this table. On the other hand iShares Nasdaq Biotechnology ETF (NASDAQ:IBB) is the least popular one with only 17 bullish hedge fund positions. Compared to these stocks Exact Sciences Corporation (NASDAQ:EXAS) is more popular among hedge funds. Considering that hedge funds are fond of this stock in relation to its market cap peers, it may be a good idea to analyze it in detail and potentially include it in your portfolio.