We know that hedge funds generate strong, risk-adjusted returns over the long run, therefore imitating the picks that they are collectively bullish on can be a profitable strategy for retail investors. With billions of dollars in assets, smart money investors have to conduct complex analyses, spend many resources and use tools that are not always available for the general crowd. This doesn’t mean that they don’t have occasional colossal losses; they do (like Peltz’s recent General Electric losses). However, it is still good idea to keep an eye on hedge fund activity. With this in mind, as the current round of 13F filings has just ended, let’s examine the smart money sentiment towards Energy Fuels Inc Ordinary Shares (Canada) (NYSEMKT:UUUU).

Energy Fuels Inc Ordinary Shares (Canada) (NYSEMKT:UUUU) has seen an increase in enthusiasm from smart money of late. UUUU was in 6 hedge funds’ portfolios at the end of September. There were 4 hedge funds in our database with UUUU holdings at the end of the previous quarter. Our calculations also showed that UUUU isn’t among the 30 most popular stocks among hedge funds.

At Q3’s end, a total of 6 of the hedge funds tracked by Insider Monkey held long positions in this stock, a change of 50% from the second quarter of 2018. Below, you can check out the change in hedge fund sentiment towards UUUU over the last 13 quarters. So, let’s find out which hedge funds were among the top holders of the stock and which hedge funds were making big moves. 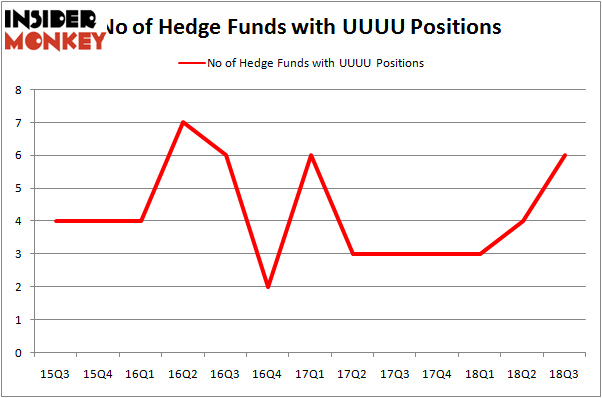 The largest stake in Energy Fuels Inc Ordinary Shares (Canada) (NYSEMKT:UUUU) was held by Prescott Group Capital Management, which reported holding $1.9 million worth of stock at the end of September. It was followed by CQS Cayman LP with a $1.5 million position. Other investors bullish on the company included Sprott Asset Management, Citadel Investment Group, and PEAK6 Capital Management.

As you can see these stocks had an average of 5.25 hedge funds with bullish positions and the average amount invested in these stocks was $38 million. That figure was $4 million in UUUU’s case. ADMA Biologics Inc (NASDAQ:ADMA) is the most popular stock in this table. On the other hand New Germany Fund, Inc. (The) (NYSE:GF) is the least popular one with only 2 bullish hedge fund positions. Energy Fuels Inc Ordinary Shares (Canada) (NYSEMKT:UUUU) is not the most popular stock in this group but hedge fund interest is still above average. This is a slightly positive signal but we’d rather spend our time researching stocks that hedge funds are piling on. In this regard ADMA might be a better candidate to consider a long position.

Natus Medical Inc (BABY): Hedge Funds Are Snapping Up
Monthly Newsletter Strategy
Download a free copy of our newsletter and see the details inside!
Hedge Fund Resource Center
Related News
Is Civeo Corporation (Canada) (CVEO) A Good Stock To Buy? Top 15 Caffeine Addicted Countries with the Highest Coffee Consumption in the World 16 Countries With The Biggest Oil Reserves In The World in 2017 10 Countries That Owe the US the Most Money Is Energy Fuels Inc (UUUU) Going To Burn These Hedge Funds? Is Just Energy Group Inc (JE) A Good Stock to Buy? Has the Time Come to Get Out of Civeo Corporation (Canada) (CVEO)? 11 Countries With The Worst Modern Music In The World The Top 5 Robo Advisor Apps of 2018 Five Reasons You Need a Day-Trading Mentor
Billionaire Hedge Funds