Is Encore Wire Corporation (WIRE) A Good Stock To Buy?

It was a rough fourth quarter for many hedge funds, which were naturally unable to overcome the big dip in the broad market, as the S&P 500 fell by about 7% during October and average hedge fund losing about 3%. The Russell 2000, composed of smaller companies, performed even worse, trailing the S&P by about 4 percentage points during the first half of Q4, as investors fled less-known quantities for safe havens. This was the case with hedge funds, who we heard were pulling money from the market amid the volatility, which included money from small-cap stocks, which they invest in at a higher rate than other investors. This action contributed to the greater decline in these stocks during the tumultuous period. We will study how this market volatility affected their sentiment towards Encore Wire Corporation (NASDAQ:WIRE) during the quarter below.

Encore Wire Corporation (NASDAQ:WIRE) was in 13 hedge funds’ portfolios at the end of the third quarter of 2018. WIRE investors should pay attention to a decrease in hedge fund interest of late. There were 14 hedge funds in our database with WIRE positions at the end of the previous quarter. Our calculations also showed that wire isn’t among the 30 most popular stocks among hedge funds.

Heading into the fourth quarter of 2018, a total of 13 of the hedge funds tracked by Insider Monkey held long positions in this stock, a change of -7% from one quarter earlier. On the other hand, there were a total of 14 hedge funds with a bullish position in WIRE at the beginning of this year. With the smart money’s capital changing hands, there exists a select group of noteworthy hedge fund managers who were boosting their stakes significantly (or already accumulated large positions). 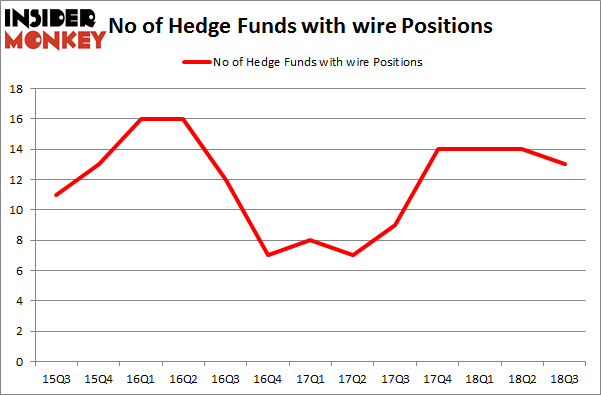 Among these funds, Royce & Associates held the most valuable stake in Encore Wire Corporation (NASDAQ:WIRE), which was worth $10.9 million at the end of the third quarter. On the second spot was GLG Partners which amassed $6.5 million worth of shares. Moreover, Forest Hill Capital, Citadel Investment Group, and AQR Capital Management were also bullish on Encore Wire Corporation (NASDAQ:WIRE), allocating a large percentage of their portfolios to this stock.

We view hedge fund activity in the stock unfavorable, but in this case there was only a single hedge fund selling its entire position: Lyon Street Capital. One hedge fund selling its entire position doesn’t always imply a bearish intent. Theoretically a hedge fund may decide to sell a promising position in order to invest the proceeds in a more promising idea. However, we don’t think this is the case in this case because none of the 700+ hedge funds tracked by Insider Monkey identified WIRE as a viable investment and initiated a position in the stock.

As you can see these stocks had an average of 10 hedge funds with bullish positions and the average amount invested in these stocks was $57 million. That figure was $33 million in WIRE’s case. Navigant Consulting, Inc. (NYSE:NCI) is the most popular stock in this table. On the other hand Nuveen New York AMT-Free Quality Municipal Income Fund (NYSE:NRK) is the least popular one with only 2 bullish hedge fund positions. Encore Wire Corporation (NASDAQ:WIRE) is not the most popular stock in this group but hedge fund interest is still above average. This is a slightly positive signal but we’d rather spend our time researching stocks that hedge funds are piling on. In this regard NCI might be a better candidate to consider a long position.