Is Employers Holdings, Inc. (EIG) A Good Stock To Buy?

The market has been volatile in the last 6 months as the Federal Reserve continued its rate hikes and then abruptly reversed its stance and uncertainty looms over trade negotiations with China. Small cap stocks have been hit hard as a result, as the Russell 2000 ETF (IWM) has underperformed the larger S&P 500 ETF (SPY) by nearly 9 percentage points. SEC filings and hedge fund investor letters indicate that the smart money seems to be paring back their overall long exposure since summer months, though some funds increased their exposure dramatically at the end of Q4 and the beginning of Q1. In this article, we analyze what the smart money thinks of Employers Holdings, Inc. (NYSE:EIG) and find out how it is affected by hedge funds’ moves.

Employers Holdings, Inc. (NYSE:EIG) was in 17 hedge funds’ portfolios at the end of March. EIG investors should be aware of a decrease in hedge fund interest in recent months. There were 18 hedge funds in our database with EIG positions at the end of the previous quarter. Our calculations also showed that eig isn’t among the 30 most popular stocks among hedge funds.

In today’s marketplace there are a multitude of metrics stock traders have at their disposal to assess stocks. A pair of the most innovative metrics are hedge fund and insider trading moves. We have shown that, historically, those who follow the top picks of the best money managers can outpace the S&P 500 by a very impressive amount (see the details here).

What does smart money think about Employers Holdings, Inc. (NYSE:EIG)?

At Q1’s end, a total of 17 of the hedge funds tracked by Insider Monkey held long positions in this stock, a change of -6% from the previous quarter. On the other hand, there were a total of 17 hedge funds with a bullish position in EIG a year ago. With hedgies’ capital changing hands, there exists an “upper tier” of key hedge fund managers who were increasing their holdings considerably (or already accumulated large positions). 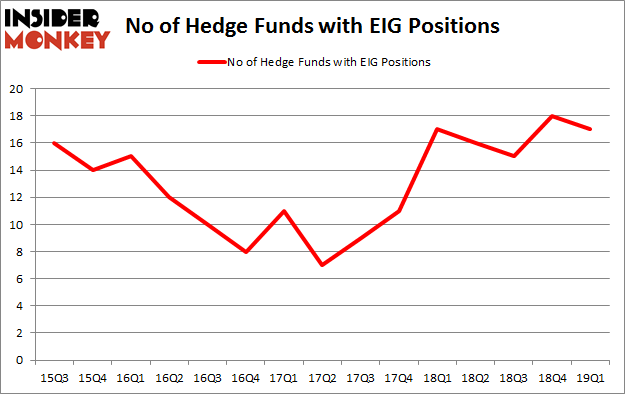 The largest stake in Employers Holdings, Inc. (NYSE:EIG) was held by GLG Partners, which reported holding $15.7 million worth of stock at the end of March. It was followed by AQR Capital Management with a $13.5 million position. Other investors bullish on the company included Renaissance Technologies, Millennium Management, and Two Sigma Advisors.

Seeing as Employers Holdings, Inc. (NYSE:EIG) has faced a decline in interest from the aggregate hedge fund industry, it’s easy to see that there exists a select few hedge funds that elected to cut their entire stakes in the third quarter. Interestingly, Minhua Zhang’s Weld Capital Management cut the largest position of the 700 funds watched by Insider Monkey, comprising an estimated $0.2 million in stock. Gavin Saitowitz and Cisco J. del Valle’s fund, Springbok Capital, also sold off its stock, about $0 million worth. These bearish behaviors are intriguing to say the least, as aggregate hedge fund interest was cut by 1 funds in the third quarter.

As you can see these stocks had an average of 17.75 hedge funds with bullish positions and the average amount invested in these stocks was $127 million. That figure was $72 million in EIG’s case. CareDx, Inc. (NASDAQ:CDNA) is the most popular stock in this table. On the other hand TPG Specialty Lending Inc (NYSE:TSLX) is the least popular one with only 12 bullish hedge fund positions. Employers Holdings, Inc. (NYSE:EIG) is not the least popular stock in this group but hedge fund interest is still below average. Our calculations showed that top 20 most popular stocks among hedge funds returned 6.2% in Q2 through June 19th and outperformed the S&P 500 ETF (SPY) by nearly 3 percentage points. A small number of hedge funds were also right about betting on EIG, though not to the same extent, as the stock returned 4.9% during the same time frame and outperformed the market as well.