Is Empire State Realty Trust Inc (NYSE:ESRT) a buy here? The best stock pickers are becoming more confident. The number of long hedge fund positions improved by 1 lately. Our calculations also showed that ESRT isn’t among the 30 most popular stocks among hedge funds. 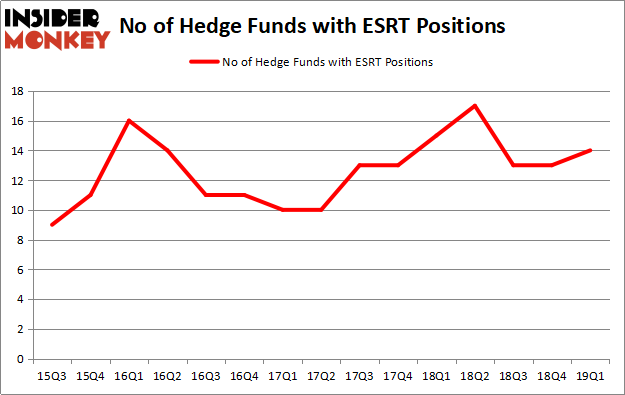 The largest stake in Empire State Realty Trust Inc (NYSE:ESRT) was held by Renaissance Technologies, which reported holding $66.4 million worth of stock at the end of March. It was followed by Two Sigma Advisors with a $15.8 million position. Other investors bullish on the company included AEW Capital Management, GLG Partners, and Millennium Management.

Now, some big names have been driving this bullishness. Marshall Wace LLP, managed by Paul Marshall and Ian Wace, established the most valuable position in Empire State Realty Trust Inc (NYSE:ESRT). Marshall Wace LLP had $2.5 million invested in the company at the end of the quarter. Gavin Saitowitz and Cisco J. del Valle’s Springbok Capital also made a $2.3 million investment in the stock during the quarter. The only other fund with a new position in the stock is Ken Griffin’s Citadel Investment Group.

As you can see these stocks had an average of 30.75 hedge funds with bullish positions and the average amount invested in these stocks was $840 million. That figure was $162 million in ESRT’s case. The Stars Group Inc. (NASDAQ:TSG) is the most popular stock in this table. On the other hand nVent Electric plc (NYSE:NVT) is the least popular one with only 25 bullish hedge fund positions. Compared to these stocks Empire State Realty Trust Inc (NYSE:ESRT) is even less popular than NVT. Hedge funds dodged a bullet by taking a bearish stance towards ESRT. Our calculations showed that the top 20 most popular hedge fund stocks returned 6.2% in Q2 through June 19th and outperformed the S&P 500 ETF (SPY) by nearly 3 percentage points. Unfortunately ESRT wasn’t nearly as popular as these 20 stocks (hedge fund sentiment was very bearish); ESRT investors were disappointed as the stock returned 0.9% during the same time frame and underperformed the market. If you are interested in investing in large cap stocks with huge upside potential, you should check out the top 20 most popular stocks among hedge funds as 13 of these stocks already outperformed the market so far in the second quarter.