Investors love stocks that consistently beat the Street without getting ahead of their fundamentals and risking a meltdown. The best stocks offer sustainable market-beating gains, with robust and improving financial metrics that support strong price growth. Does Embraer SA (ADR) (NYSE:ERJ) fit the bill? Let’s take a look at what its recent results tell us about its potential for future gains.

What we’re looking for
The graphs you’re about to see tell Embraer’s story, and we’ll be grading the quality of that story in several ways: 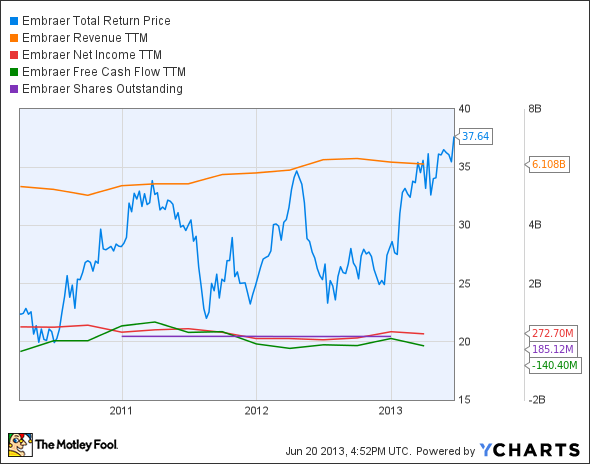 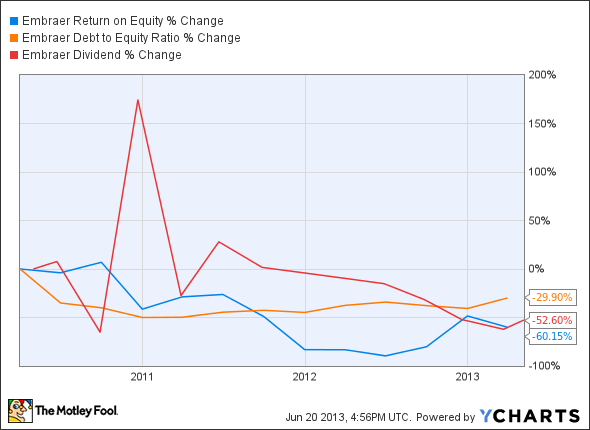 How we got here and where we’re going
Embraer doesn’t look very strong today with only three out of nine possible passing grades. Maintaining its dividend has actually hurt Embraer SA (ADR) (NYSE:ERJ)’s score, since it’s been forced to reduce payouts — and its negative free cash flow still can’t support that payout at present at any rate. Yet despite this general weakness, investors have been flocking to the aircraft manufacturer recently. Is that optimism justified? Let’s dig a little deeper.

This year has been one of big deals and big rumors for Embraer SA (ADR) (NYSE:ERJ). Just a few days ago, the company announced a deal with American International Group Inc (NYSE:AIG)‘s airplane leasing subsidiary for at least 50 jets and potentially up to 100, beginning in 2018. It’s a multibillion-dollar deal that could be worth more than Embraer’s entire trailing-12-month revenue stream. Embraer also has a deal with Republic Airways Holdings Inc. (NASDAQ:RJET) for at least 47 E-175 jets — the first of which should be delivered around this time of year — and potentially 47 more if the airline likes what it sees. Several major carriers are also looking to expand their fleet of regional jets, which is Embraer’s specialty and thus also its great opportunity. SkyWest, Inc. (NASDAQ:SKYW) is also committed to buying 40 of the E-175s and could buy up to 140. Between these three deals, Embraer’s backlog should swell considerably.

Embraer SA (ADR) (NYSE:ERJ)’s even getting some help from rival plane maker The Boeing Company (NYSE:BA) in military sales. Embraer will rely on Boeing to market its KC-390 aerial refueling craft, which can also seat 80 people or carry nearly 24 tons of cargo. It’s purportedly the largest aircraft ever built in Brazil, and its versatility should make it appealing to the world’s modern air forces, which are estimated to want approximately 700 KC-390s. However, Embraer may be in for some frustration in the defense segment, as its joint contract with Sierra Nevada to supply the Air Force with 20 Light Air Support craft has been protested by rival contractor Beechcraft.