It’s now more than halfway through the period that Eli Lilly & Co. (NYSE:LLY) has called its “years YZ,” a term describing the years spanning from 2011 to 2014. The company knew that this period would be particularly challenging as several of its top drugs lost patent protection.

In April 2011, Lilly CEO John Lechleiter laid out the company’s plans to navigate the difficult period. How have these plans worked out so far? Let’s look to see if Lilly is being wise in how the company is handling years YZ.

Controlling costs
One of the first things that Lechleiter pointed out in his 2011 speech was Lilly’s efforts to control costs. He noted then that the company was well on its way to achieve cost reduction goals set a few years earlier. How has Lilly done since that point? 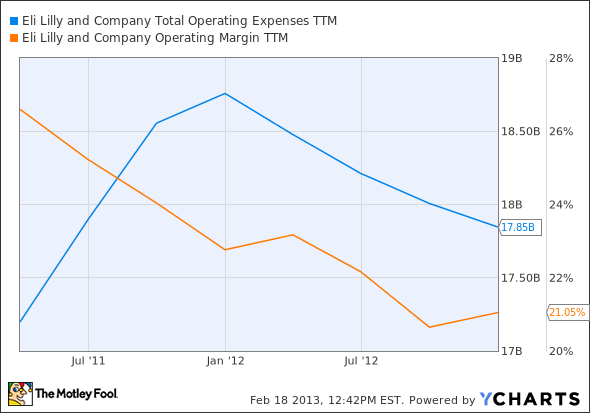 Operating expenses continued to climb through the end of 2011, but then began to come back down. That’s the good news. The bad news is that operating margins have steadily declined so far in the YZ years.

Staying the course
In his 2011 speech, Lechleiter took a swipe at other pharmaceutical companies by stating that some of Lilly’s “peers are shifting direction, moving away from innovative drugs or staking their future on consolidation.” He emphasized that “this is not our path at Lilly.”

Lechleiter’s comments about consolidation likely referred to Pfizer Inc. (NYSE:PFE)‘s acquisition of Wyeth and Merck & Co., Inc. (NYSE:MRK)‘s buyout of Schering-Plough. The remark about peers “moving away from innovative drugs” perhaps was an early hint at Abbott Laboratories (NYSE:ABT)‘s spin-off of AbbVie Inc (NYSE:ABBV) as a separate business, which was publicly announced several months later. How have these moves by Pfizer, Merck & Co., Inc. (NYSE:MRK) and Abbott paid off for investors compared to Lilly’s stay-the-course approach? 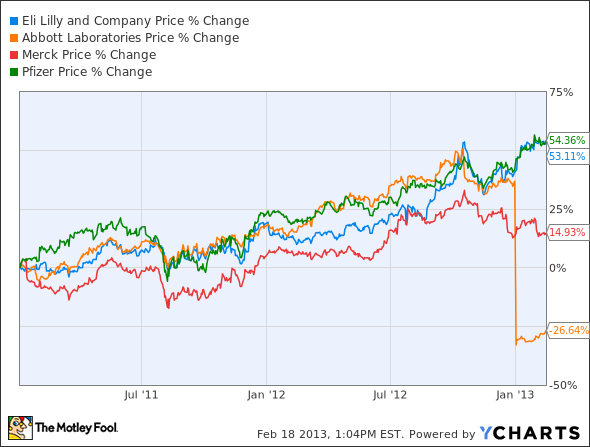 Judging by share price appreciation since 2011, Lilly’s approach has worked out pretty well for shareholders. Pfizer won overall in stock performance, but just barely. Abbott isn’t too far behind Lilly. (Note: Abbott’s price dropped in 2012 in connection with the AbbVie spin-off.) Merck’s performance wasn’t so great.

Lilly’s stick-to-your-knitting philosophy didn’t totally rule out smart acquisitions, though. The company announced just weeks prior to Lechleiter’s April 2011 speech that it was buying Janssen Pharmaceutical’s animal health business. However, true to his word, Lechleiter has not led the company to any major acquisitions so far in the YZ years.

Growth areas
In early 2011, Lechleiter pointed to three growth areas for the company: Japan, emerging markets, and animal health. How have these panned out for Lilly so far?

As for Japan, growth numbers look all right. Lilly reported volume growth in the country of 14% for 2012. One important factor is that the company still retains patent protection for Zyprexa in Japan. However, lower prices for several drugs translated to total Japanese revenue growth of 7%.