Is Eli Lilly and Company (LLY) A Good Stock To Buy?

In these volatile markets we scrutinize hedge fund filings to get a reading on which direction each stock might be going. We know that hedge funds generate strong, risk-adjusted returns over the long run, therefore imitating the picks that they are collectively bullish on can be a profitable strategy for retail investors. With billions of dollars in assets, smart money investors have to conduct complex analyses, spend many resources and use tools that are not always available for the general crowd. This doesn’t mean that they don’t have occasional colossal losses; they do (like Peltz’s recent General Electric losses). However, it is still a good idea to keep an eye on hedge fund activity. With this in mind, as the current round of 13F filings has just ended, let’s examine the smart money sentiment towards Eli Lilly and Company (NYSE:LLY).

Eli Lilly and Company (NYSE:LLY) has experienced a decrease in enthusiasm from smart money recently. LLY was in 43 hedge funds’ portfolios at the end of the fourth quarter of 2019. There were 44 hedge funds in our database with LLY holdings at the end of the previous quarter. Our calculations also showed that LLY isn’t among the 30 most popular stocks among hedge funds (click for Q4 rankings and see the video below for Q3 rankings).

According to most shareholders, hedge funds are assumed to be underperforming, old investment vehicles of yesteryear. While there are more than 8000 funds with their doors open today, Our researchers choose to focus on the crème de la crème of this club, around 850 funds. These hedge fund managers control the majority of all hedge funds’ total asset base, and by monitoring their inimitable stock picks, Insider Monkey has brought to light a few investment strategies that have historically beaten the market. Insider Monkey’s flagship short hedge fund strategy defeated the S&P 500 short ETFs by around 20 percentage points a year since its inception in March 2017. Our portfolio of short stocks lost 35.3% since February 2017 (through March 3rd) even though the market was up more than 35% during the same period. We just shared a list of 7 short targets in our latest quarterly update .

We leave no stone unturned when looking for the next great investment idea. For example Europe is set to become the world’s largest cannabis market, so we check out this European marijuana stock pitch. We read hedge fund investor letters and listen to stock pitches at hedge fund conferences, and and go through short-term trade recommendations like this one. We even check out the recommendations of services with hard to believe track records. In January, we recommended a long position in one of the most shorted stocks in the market, and that stock returned more than 50% despite the large losses in the market since our recommendation. Now we’re going to take a peek at the recent hedge fund action encompassing Eli Lilly and Company (NYSE:LLY).

At the end of the fourth quarter, a total of 43 of the hedge funds tracked by Insider Monkey were long this stock, a change of -2% from one quarter earlier. Below, you can check out the change in hedge fund sentiment towards LLY over the last 18 quarters. With hedgies’ sentiment swirling, there exists a select group of noteworthy hedge fund managers who were increasing their stakes significantly (or already accumulated large positions). 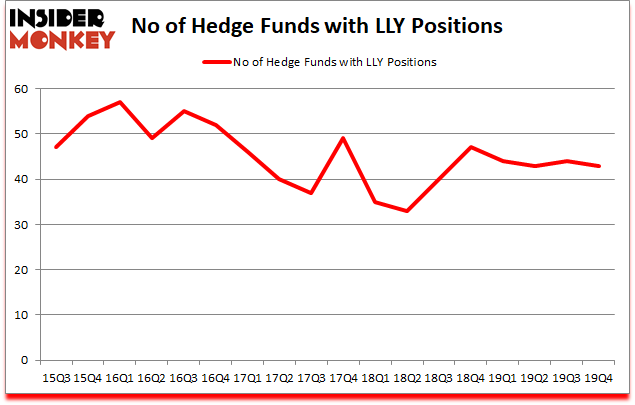 Among these funds, Fisher Asset Management held the most valuable stake in Eli Lilly and Company (NYSE:LLY), which was worth $579.9 million at the end of the third quarter. On the second spot was AQR Capital Management which amassed $329.4 million worth of shares. Two Sigma Advisors, Citadel Investment Group, and Point72 Asset Management were also very fond of the stock, becoming one of the largest hedge fund holders of the company. In terms of the portfolio weights assigned to each position Integral Health Asset Management allocated the biggest weight to Eli Lilly and Company (NYSE:LLY), around 2.56% of its 13F portfolio. Sivik Global Healthcare is also relatively very bullish on the stock, earmarking 2.44 percent of its 13F equity portfolio to LLY.

Because Eli Lilly and Company (NYSE:LLY) has experienced a decline in interest from the entirety of the hedge funds we track, we can see that there exists a select few hedge funds that elected to cut their full holdings by the end of the third quarter. Interestingly, Benjamin A. Smith’s Laurion Capital Management sold off the biggest investment of the 750 funds followed by Insider Monkey, totaling about $39.1 million in stock. Renaissance Technologies, also cut its stock, about $18.2 million worth. These bearish behaviors are important to note, as aggregate hedge fund interest dropped by 1 funds by the end of the third quarter.

As you can see these stocks had an average of 44.75 hedge funds with bullish positions and the average amount invested in these stocks was $2518 million. That figure was $1493 million in LLY’s case. Union Pacific Corporation (NYSE:UNP) is the most popular stock in this table. On the other hand ASML Holding N.V. (NASDAQ:ASML) is the least popular one with only 22 bullish hedge fund positions. Eli Lilly and Company (NYSE:LLY) is not the least popular stock in this group but hedge fund interest is still below average. Our calculations showed that top 20 most popular stocks among hedge funds returned 41.3% in 2019 and outperformed the S&P 500 ETF (SPY) by 10.1 percentage points. These stocks lost 11.7% in 2020 through March 11th but still beat the market by 3.1 percentage points. A small number of hedge funds were also right about betting on LLY as the stock returned 7.1% during the same time period and outperformed the market by an even larger margin.