There are several ways to beat the market, and investing in small cap stocks has historically been one of them. We like to improve the odds of beating the market further by examining what famous hedge fund operators such as Carl Icahn and George Soros think. Those hedge fund operators make billions of dollars each year by hiring the best and the brightest to do research on stocks, including small cap stocks that big brokerage houses simply don’t cover. Because of Carl Icahn and other elite funds’ exemplary historical records, we pay attention to their small cap picks. In this article, we use hedge fund filing data to analyze Dynavax Technologies Corporation (NASDAQ:DVAX).

Is Dynavax Technologies Corporation (NASDAQ:DVAX) a good investment today? Investors who are in the know are getting less bullish. The number of bullish hedge fund positions decreased by 1 lately. Our calculations also showed that dvax isn’t among the 30 most popular stocks among hedge funds. DVAX was in 19 hedge funds’ portfolios at the end of the third quarter of 2018. There were 20 hedge funds in our database with DVAX holdings at the end of the previous quarter.

In the 21st century investor’s toolkit there are a multitude of tools market participants use to appraise publicly traded companies. Some of the less utilized tools are hedge fund and insider trading indicators. Our researchers have shown that, historically, those who follow the top picks of the elite investment managers can outpace the market by a superb amount (see the details here).

What have hedge funds been doing with Dynavax Technologies Corporation (NASDAQ:DVAX)?

At Q3’s end, a total of 19 of the hedge funds tracked by Insider Monkey were bullish on this stock, a change of -5% from the second quarter of 2018. Below, you can check out the change in hedge fund sentiment towards DVAX over the last 13 quarters. With the smart money’s capital changing hands, there exists an “upper tier” of noteworthy hedge fund managers who were increasing their holdings considerably (or already accumulated large positions). 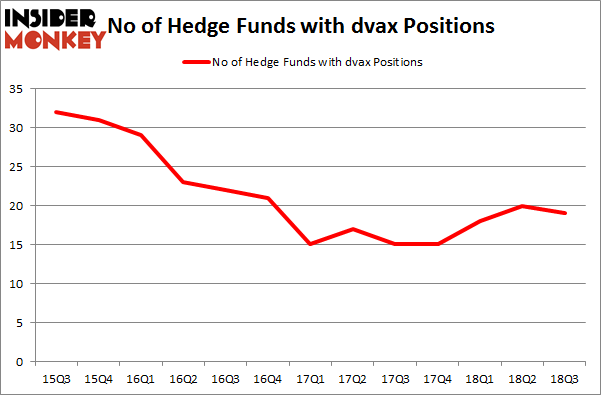 More specifically, Healthcor Management LP was the largest shareholder of Dynavax Technologies Corporation (NASDAQ:DVAX), with a stake worth $38.7 million reported as of the end of September. Trailing Healthcor Management LP was Rima Senvest Management, which amassed a stake valued at $31.2 million. D E Shaw, Point State Capital, and Farallon Capital were also very fond of the stock, giving the stock large weights in their portfolios.

Seeing as Dynavax Technologies Corporation (NASDAQ:DVAX) has witnessed a decline in interest from the smart money, it’s safe to say that there was a specific group of fund managers that slashed their positions entirely in the third quarter. Interestingly, Thomas E. Claugus’s GMT Capital dropped the biggest investment of all the hedgies watched by Insider Monkey, valued at close to $17.7 million in stock. Jason Karp’s fund, Tourbillon Capital Partners, also sold off its stock, about $7.9 million worth. These transactions are interesting, as aggregate hedge fund interest dropped by 1 funds in the third quarter.

As you can see these stocks had an average of 9.5 hedge funds with bullish positions and the average amount invested in these stocks was $72 million. That figure was $152 million in DVAX’s case. ObsEva SA (NASDAQ:OBSV) is the most popular stock in this table. On the other hand Univest Corporation of Pennsylvania (NASDAQ:UVSP) is the least popular one with only 7 bullish hedge fund positions. Compared to these stocks Dynavax Technologies Corporation (NASDAQ:DVAX) is more popular among hedge funds. Considering that hedge funds are fond of this stock in relation to its market cap peers, it may be a good idea to analyze it in detail and potentially include it in your portfolio.