Is Dyadic International, Inc. (DYAI) A Good Stock To Buy?

Before we spend days researching a stock idea we like to take a look at how hedge funds and billionaire investors recently traded that stock. Russell 2000 ETF (IWM) lagged the larger S&P 500 ETF (SPY) by more than 10 percentage points since the end of the third quarter of 2018. This means hedge funds that are allocating a higher percentage of their portfolio to small-cap stocks were probably underperforming the market. However, this also means that as small-cap stocks start to mean revert, these hedge funds will start delivering better returns than the S&P 500 Index funds. In this article, we will take a look at what hedge funds think about Dyadic International, Inc. (NASDAQ:DYAI).

Is Dyadic International, Inc. (NASDAQ:DYAI) a buy, sell, or hold? Money managers are getting less bullish. The number of bullish hedge fund bets were cut by 1 lately. Our calculations also showed that DYAI isn’t among the 30 most popular stocks among hedge funds. DYAI was in 2 hedge funds’ portfolios at the end of the third quarter of 2019. There were 3 hedge funds in our database with DYAI positions at the end of the previous quarter.

Unlike the largest US hedge funds that are convinced Dow will soar past 40,000 or the world’s most bearish hedge fund that’s more convinced than ever that a crash is coming, our long-short investment strategy doesn’t rely on bull or bear markets to deliver double digit returns. We only rely on the best performing hedge funds‘ buy/sell signals. We’re going to take a look at the key hedge fund action encompassing Dyadic International, Inc. (NASDAQ:DYAI).

What does smart money think about Dyadic International, Inc. (NASDAQ:DYAI)?

At Q3’s end, a total of 2 of the hedge funds tracked by Insider Monkey were bullish on this stock, a change of -33% from the second quarter of 2019. By comparison, 0 hedge funds held shares or bullish call options in DYAI a year ago. With hedgies’ sentiment swirling, there exists a select group of notable hedge fund managers who were boosting their stakes considerably (or already accumulated large positions). 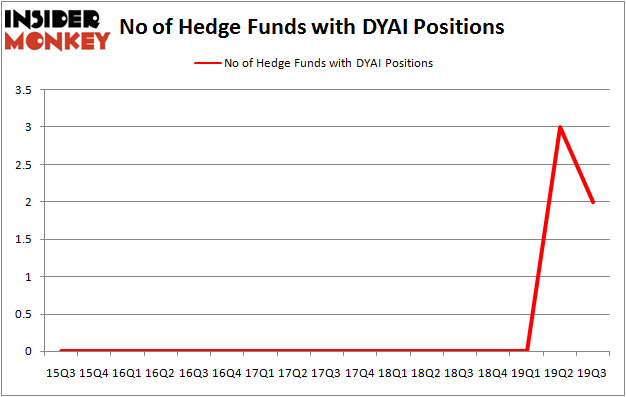 The largest stake in Dyadic International, Inc. (NASDAQ:DYAI) was held by Bandera Partners, which reported holding $6.1 million worth of stock at the end of September. It was followed by Marshall Wace with a $0.1 million position.

Because Dyadic International, Inc. (NASDAQ:DYAI) has faced declining sentiment from the smart money, it’s easy to see that there were a few hedge funds who were dropping their full holdings by the end of the third quarter. Interestingly, Israel Englander’s Millennium Management said goodbye to the largest stake of all the hedgies followed by Insider Monkey, worth about $0.2 million in stock, and Renaissance Technologies was right behind this move, as the fund cut about $0.1 million worth. These bearish behaviors are intriguing to say the least, as aggregate hedge fund interest was cut by 1 funds by the end of the third quarter.

As you can see these stocks had an average of 7.25 hedge funds with bullish positions and the average amount invested in these stocks was $26 million. That figure was $6 million in DYAI’s case. Calithera Biosciences Inc (NASDAQ:CALA) is the most popular stock in this table. On the other hand Anavex Life Sciences Corp. (NASDAQ:AVXL) is the least popular one with only 4 bullish hedge fund positions. Compared to these stocks Dyadic International, Inc. (NASDAQ:DYAI) is even less popular than AVXL. Hedge funds dodged a bullet by taking a bearish stance towards DYAI. Our calculations showed that the top 20 most popular hedge fund stocks returned 34.7% in 2019 through November 22nd and outperformed the S&P 500 ETF (SPY) by 8.5 percentage points. Unfortunately DYAI wasn’t nearly as popular as these 20 stocks (hedge fund sentiment was very bearish); DYAI investors were disappointed as the stock returned -5.4% during the fourth quarter (through 11/22) and underperformed the market. If you are interested in investing in large cap stocks with huge upside potential, you should check out the top 20 most popular stocks among hedge funds as 70 percent of these stocks already outperformed the market so far in Q4.

Were Hedge Funds Right About Souring On Cheniere Energy, Inc. (LNG)?
Monthly Newsletter Strategy
Download a free copy of our newsletter and see the details inside!
Hedge Fund Resource Center
Related News
10 Easiest Popular Songs to Play on Piano 10 Human Trafficking Stories in America 10 Easiest Instruments For Adults To Learn On Their Own
Billionaire Hedge Funds