Is Deere & Company (DE) A Good Stock To Buy?

Deere & Company (NYSE:DE) was in 37 hedge funds’ portfolios at the end of September, which was a far cry from the 51 portfolios that held it at the end of June. For that reason, Deere was one of 10 Stocks Hedge Funds Ditched in Q3 Just Before the Market Crushed Them. Unsurprisingly, it also failed to rank among the 30 Most Popular Stocks Among Hedge Funds.

What have hedge funds been doing with Deere & Company (NYSE:DE)?

Heading into the fourth quarter of 2018, a total of 37 of the hedge funds tracked by Insider Monkey were long this stock, a 27% fall from the previous quarter. The graph below displays the number of hedge funds with bullish position in DE over the last 13 quarters. With hedge funds’ capital changing hands, there exists a few notable hedge fund managers who were increasing their stakes considerably (or already accumulated large positions). 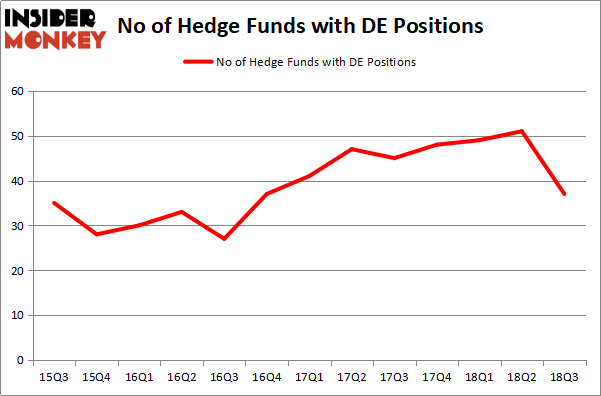 According to Insider Monkey’s hedge fund database, Generation Investment Management, managed by David Blood and Al Gore, holds the largest position in Deere & Company (NYSE:DE). Generation Investment Management has a $635.1 million position in the stock, comprising 5.1% of its 13F portfolio. Sitting at the No. 2 spot is Adage Capital Management, managed by Phill Gross and Robert Atchinson, which holds a $537.5 million position; the fund has 1.2% of its 13F portfolio invested in the stock. Other members of the smart money with similar optimism include Gabriel Plotkin’s Melvin Capital Management, Dan Loeb’s Third Point and Aaron Cowen’s Suvretta Capital Management.

Judging by the fact that Deere & Company (NYSE:DE) has experienced a decline in interest from the smart money, we can see that there exists a select few fund managers that slashed their positions entirely in the third quarter. At the top of the heap, Anand Parekh’s Alyeska Investment Group cut the biggest stake of the 700 funds tracked by Insider Monkey, worth about $75.9 million in stock. Jim Simons’ fund, Renaissance Technologies, also said goodbye to its stock, about $61.6 million worth. These transactions are intriguing to say the least, as aggregate hedge fund interest dropped by 14 funds in the third quarter.

As you can see these stocks had an average of 38 hedge funds with bullish positions and the average amount invested in these stocks was $2.33 billion. That figure was $2.73 billion in DE’s case. General Motors Company (NYSE:GM) is the most popular stock in this table. On the other hand Banco Bradesco SA (NYSE:BBD) is the least popular one with only 14 bullish hedge fund positions. Deere & Company (NYSE:DE) is not the least popular stock in this group but hedge fund interest is still below average. This is a slightly negative signal and we’d rather spend our time researching stocks that hedge funds are piling on. In this regard GM might be a better candidate to consider a long position.