Every investor can appreciate a stock that consistently beats the Street without getting ahead of its fundamentals and risking a meltdown. The best stocks offer sustainable market-beating gains, with improving financial metrics that support strong price growth. Let’s take a look at what Deckers Outdoor Corp (NASDAQ:DECK)‘s recent results tell us about its potential for future gains.

What the numbers tell you
The graphs you’re about to see tell Deckers’ story, and we’ll be grading the quality of that story in several ways.

Growth is important on both top and bottom lines, and an improving profit margin is a great sign that a company’s become more efficient over time. Since profits may not always be reported at a steady rate, we’ll also look at how much Deckers’ free cash flow has grown in comparison to its net income.

A company that generates more earnings per share over time, regardless of the number of shares outstanding, is heading in the right direction. If Deckers’ share price has kept pace with its earnings growth, that’s another good sign that its stock can move higher.

Is Deckers managing its resources well? A company’s return on equity should be improving, and its debt to equity ratio declining, if it’s to earn our approval.

By the numbers
Now, let’s take a look at Deckers’ key statistics: 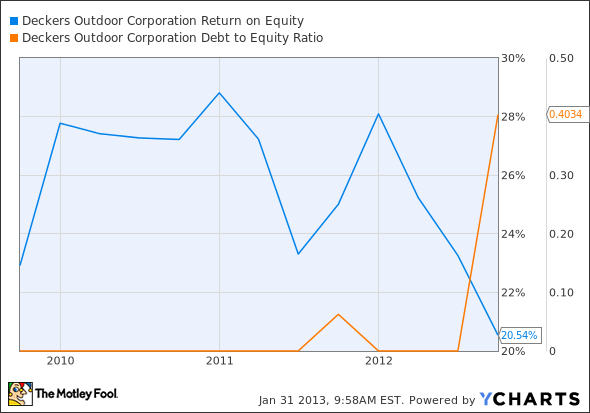 How we got here and where we’re going
While Deckers does have some momentum going on the bottom line, it’s not enough to overcome declining margins and free cash flow. Deckers has had some well-known problems with material costs, so if those can be handled and surpassed, there’s no reason why the company shouldn’t earn more than a mere three out of seven passing grades next time we examine it.

Deckers’ stock has been weaker over the past year than this chart indicates, as it’s hit multiple 52-week lows before bottoming out in October. Since then, it’s marginally higher, but still far below where it once was. The problem stems from Deckers’ flagship Ugg boots, which make up, by far, the largest slice of the company’s revenue, and which have had their margins undermined by rising input costs. This is worse than the problem plaguing fellow shoemaker Crocs, Inc. (NASDAQ:CROX) , which produces its own proprietary material — but both companies suffer the same vagaries of a fickle consumer market. Both companies’ third-quarter earnings reports were lousy, which points to slackening demand.

Related Insider Monkey Articles
What You Need to Watch With Under Armour Inc (UA) in 2013Deckers Outdoor Corp (DECK): Janus Capital Gets a New Pair of ShoesBull call spread on LVS looks for Q3 earnings to impress
Monthly Newsletter Strategy
Download a free copy of our newsletter and see the details inside!
Hedge Fund Resource Center
Billionaire Hedge Funds