Is Deciphera Pharmaceuticals, Inc. (DCPH) A Good Stock To Buy?

With the first-quarter round of 13F filings behind us it is time to take a look at the stocks in which some of the best money managers in the world preferred to invest or sell heading into the first quarter. One of these stocks was Deciphera Pharmaceuticals, Inc. (NASDAQ:DCPH).

Deciphera Pharmaceuticals, Inc. (NASDAQ:DCPH) shareholders have witnessed an increase in enthusiasm from smart money of late. DCPH was in 17 hedge funds’ portfolios at the end of March. There were 15 hedge funds in our database with DCPH positions at the end of the previous quarter. Our calculations also showed that dcph isn’t among the 30 most popular stocks among hedge funds.

What does smart money think about Deciphera Pharmaceuticals, Inc. (NASDAQ:DCPH)?

At the end of the first quarter, a total of 17 of the hedge funds tracked by Insider Monkey were bullish on this stock, a change of 13% from one quarter earlier. The graph below displays the number of hedge funds with bullish position in DCPH over the last 15 quarters. With hedgies’ sentiment swirling, there exists an “upper tier” of key hedge fund managers who were boosting their holdings meaningfully (or already accumulated large positions). 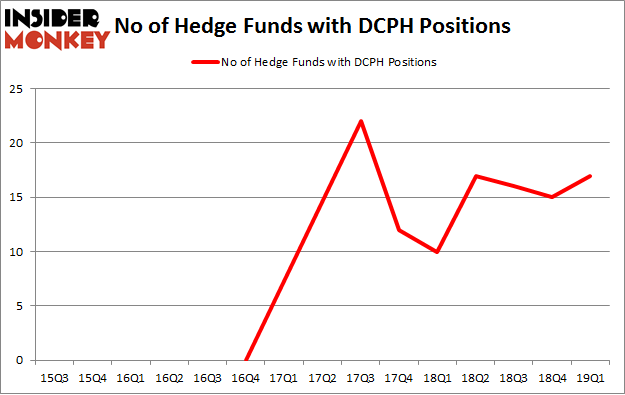 More specifically, OrbiMed Advisors was the largest shareholder of Deciphera Pharmaceuticals, Inc. (NASDAQ:DCPH), with a stake worth $84 million reported as of the end of March. Trailing OrbiMed Advisors was Redmile Group, which amassed a stake valued at $37.8 million. Millennium Management, Alkeon Capital Management, and Deerfield Management were also very fond of the stock, giving the stock large weights in their portfolios.

As you can see these stocks had an average of 12.5 hedge funds with bullish positions and the average amount invested in these stocks was $94 million. That figure was $216 million in DCPH’s case. Par Pacific Holdings, Inc. (NYSE:PARR) is the most popular stock in this table. On the other hand The Gorman-Rupp Company (NYSE:GRC) is the least popular one with only 7 bullish hedge fund positions. Compared to these stocks Deciphera Pharmaceuticals, Inc. (NASDAQ:DCPH) is more popular among hedge funds. Our calculations showed that top 20 most popular stocks among hedge funds returned 6.2% in Q2 through June 19th and outperformed the S&P 500 ETF (SPY) by nearly 3 percentage points. Hedge funds were also right about betting on DCPH, though not to the same extent, as the stock returned 5.4% during the same period and outperformed the market as well.