It was a rough fourth quarter for many hedge funds, which were naturally unable to overcome the big dip in the broad market, as the S&P 500 fell by about 7% during October and average hedge fund losing about 3%. The Russell 2000, composed of smaller companies, performed even worse, trailing the S&P by about 4 percentage points during the first half of Q4, as investors fled less-known quantities for safe havens. This was the case with hedge funds, who we heard were pulling money from the market amid the volatility, which included money from small-cap stocks, which they invest in at a higher rate than other investors. This action contributed to the greater decline in these stocks during the tumultuous period. We will study how this market volatility affected their sentiment towards Customers Bancorp Inc (NASDAQ:CUBI) during the quarter below.

Hedge fund interest in Customers Bancorp shares was flat at the end of last quarter. This is usually a negative indicator. The level and the change in hedge fund popularity aren’t the only variables you need to analyze to decipher hedge funds’ perspectives. A stock may witness a boost in popularity but it may still be less popular than similarly priced stocks. That’s why at the end of this article we will examine companies such as Central Securities Corporation (NYSE:CET), and Armada Hoffler Properties Inc (NYSE:AHH) to gather more data points.

While collecting data for our article, we came across Incandescent Capital’s Quarterly Report, in which the hedge fund provided a detailed account regarding the smartphone company. We bring you a snippet of that letter:

“Customers Bancorp (CUBI), had a miserable 2017, declining -27.4% from $35.82 to $25.99. This was not, to me, a great surprise. I wrote in last year‘s letter that repeating their outstanding performance would be unlikely due to the P/B multiple expansion that has already valued them in-line with their peers. Subsequently, I sold about half of our stake in Q1 for $33.89 per share.

Customers is a regional business bank serving the New York/New England area that eschews brick-and-mortar branches and instead recruits banking teams who travel to client sites to conduct business and have deep roots within each local community. The benefits of this “concierge” model are multiple. CUBI has much lower fixed costs and much higher productivity per employee than the typical bank. Lower fixed costs give them the leeway to generate good ROEs (10-12%) without reaching for higher-yielding risky loans (non-performing loans were a minuscule 0.30% of assets compared to peer/industry averages of around 1%).”

At Q3’s end, a total of 9 of the hedge funds tracked by Insider Monkey held long positions in this stock, no change from the second quarter of 2018. The graph below displays the number of hedge funds with a bullish position in CUBI over the last 13 quarters. With the smart money’s sentiment swirling, there exist a few noteworthy hedge fund managers who were boosting their holdings considerably (or already accumulated large positions). 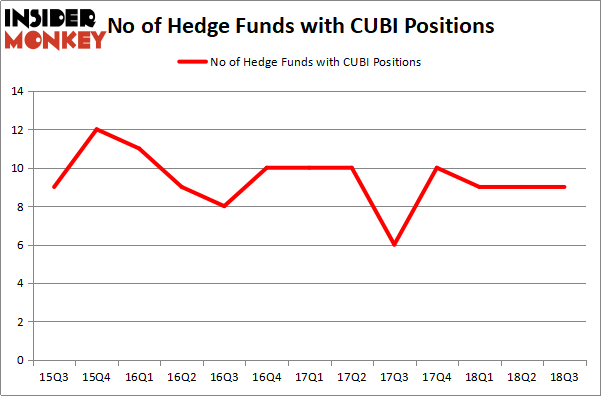 When looking at the institutional investors followed by Insider Monkey, Basswood Capital, managed by Matthew Lindenbaum, holds the number one position in Customers Bancorp Inc (NASDAQ:CUBI). Basswood Capital has a $5.7 million position in the stock, comprising 0.3% of its 13F portfolio. Sitting at the No. 2 spot is GLG Partners, led by Noam Gottesman, holding a $5.2 million position; the fund has less than 0.1%% of its 13F portfolio invested in the stock. Some other professional money managers that hold long positions encompass Cliff Asness’ AQR Capital Management, Peter Algert and Kevin Coldiron’s Algert Coldiron Investors and Jim Simons’ Renaissance Technologies.

Judging by the fact that Customers Bancorp Inc (NASDAQ:CUBI) has experienced declining sentiment from the smart money, it’s safe to say that there lies a certain “tier” of funds that elected to cut their entire stakes last quarter. Interestingly, Jeffrey Talpins’s Element Capital Management said goodbye to the largest stake of all the hedgies tracked by Insider Monkey, valued at close to $0.3 million in stock, and Andrew Feldstein and Stephen Siderow’s Blue Mountain Capital was right behind this move, as the fund dumped about $0.2 million worth. These transactions are intriguing, to say the least, as total hedge fund interest stayed the same (this is a bearish signal in our experience).

As you can see these stocks had an average of 4.75 hedge funds with bullish positions and the average amount invested in these stocks was $23 million. That figure was $18 million in CUBI’s case. Armada Hoffler Properties Inc (NYSE:AHH) is the most popular stock in this table. On the other hand, Central Securities Corporation (NYSE:CET) is the least popular one with only 3 bullish hedge fund positions. Compared to these stocks Customers Bancorp Inc (NASDAQ:CUBI) is more popular among hedge funds. Considering that hedge funds are fond of this stock in relation to its market cap peers, it may be a good idea to analyze it in detail and potentially include it in your portfolio.