Is Customers Bancorp Inc (CUBI) A Good Stock To Buy ?

While the market driven by short-term sentiment influenced by the accomodative interest rate environment in the US, increasing oil prices and optimism towards the resolution of the trade war with China, many smart money investors kept their cautious approach regarding the current bull run in the first quarter and hedging or reducing many of their long positions. However, as we know, big investors usually buy stocks with strong fundamentals, which is why we believe we can profit from imitating them. In this article, we are going to take a look at the smart money sentiment surrounding Customers Bancorp Inc (NYSE:CUBI).

Customers Bancorp Inc (NYSE:CUBI) was in 13 hedge funds’ portfolios at the end of the first quarter of 2019. CUBI investors should pay attention to a decrease in enthusiasm from smart money lately. There were 15 hedge funds in our database with CUBI positions at the end of the previous quarter. Our calculations also showed that CUBI isn’t among the 30 most popular stocks among hedge funds.

What have hedge funds been doing with Customers Bancorp Inc (NYSE:CUBI)? 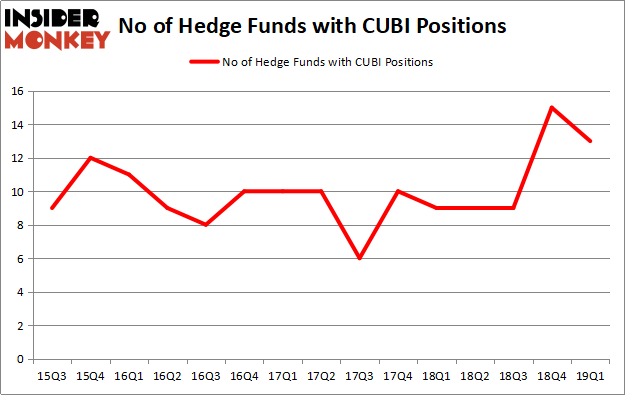 More specifically, Third Avenue Management was the largest shareholder of Customers Bancorp Inc (NYSE:CUBI), with a stake worth $11.4 million reported as of the end of March. Trailing Third Avenue Management was GLG Partners, which amassed a stake valued at $7.3 million. Newtyn Management, Renaissance Technologies, and D E Shaw were also very fond of the stock, giving the stock large weights in their portfolios.

Because Customers Bancorp Inc (NYSE:CUBI) has witnessed bearish sentiment from hedge fund managers, it’s easy to see that there lies a certain “tier” of hedge funds that elected to cut their entire stakes by the end of the third quarter. Intriguingly, Peter Rathjens, Bruce Clarke and John Campbell’s Arrowstreet Capital dumped the largest investment of all the hedgies followed by Insider Monkey, totaling an estimated $0.9 million in stock. Minhua Zhang’s fund, Weld Capital Management, also said goodbye to its stock, about $0.4 million worth. These moves are interesting, as aggregate hedge fund interest dropped by 2 funds by the end of the third quarter.

As you can see these stocks had an average of 4 hedge funds with bullish positions and the average amount invested in these stocks was $14 million. That figure was $40 million in CUBI’s case. Pzena Investment Management Inc (NYSE:PZN) is the most popular stock in this table. On the other hand Puxin Limited (NYSE:NEW) is the least popular one with only 2 bullish hedge fund positions. Compared to these stocks Customers Bancorp Inc (NYSE:CUBI) is more popular among hedge funds. Our calculations showed that top 20 most popular stocks among hedge funds returned 6.2% in Q2 through June 19th and outperformed the S&P 500 ETF (SPY) by nearly 3 percentage points. Hedge funds were also right about betting on CUBI as the stock returned 11.4% during the same period and outperformed the market by an even larger margin. Hedge funds were clearly right about piling into this stock relative to other stocks with similar market capitalizations.