Before we spend days researching a stock idea we’d like to take a look at how hedge funds and billionaire investors recently traded that stock. S&P 500 Index ETF (SPY) lost 8.7% through October 26th. Forty percent of the S&P 500 constituents were down more than 10%. The average return of a randomly picked stock in the index is -9.5%. This means you (or a monkey throwing a dart) have less than an even chance of beating the market by randomly picking a stock. On the other hand, the top 25 most popular S&P 500 stocks among hedge funds had an average loss of 8.8%. In this article, we will take a look at what hedge funds think about CURO Group Holdings Corp. (NYSE:CURO).

Is CURO Group Holdings Corp. (NYSE:CURO) an attractive investment right now? The smart money is turning less bullish. The number of bullish hedge fund bets decreased by 2 in recent months. Our calculations also showed that CURO isn’t among the 30 most popular stocks among hedge funds.

What have hedge funds been doing with CURO Group Holdings Corp. (NYSE:CURO)?

Heading into the fourth quarter of 2018, a total of 16 of the hedge funds tracked by Insider Monkey were bullish on this stock, a change of -11% from the previous quarter. Below, you can check out the change in hedge fund sentiment towards CURO over the last 13 quarters. With hedgies’ positions undergoing their usual ebb and flow, there exists a select group of notable hedge fund managers who were increasing their holdings significantly (or already accumulated large positions). 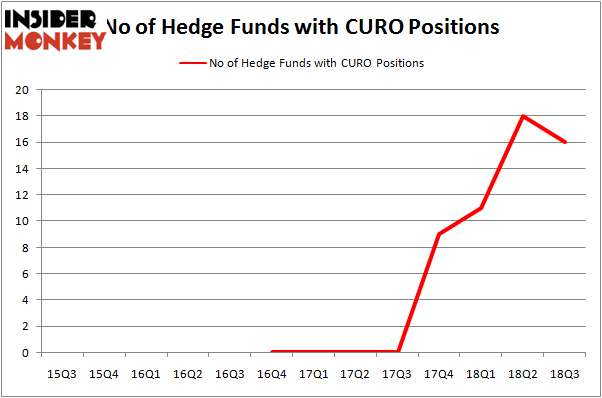 Among these funds, Empyrean Capital Partners held the most valuable stake in CURO Group Holdings Corp. (NYSE:CURO), which was worth $57.1 million at the end of the third quarter. On the second spot was Nantahala Capital Management which amassed $44.6 million worth of shares. Moreover, Glendon Capital Management, Second Curve Capital, and Columbus Circle Investors were also bullish on CURO Group Holdings Corp. (NYSE:CURO), allocating a large percentage of their portfolios to this stock.

Because CURO Group Holdings Corp. (NYSE:CURO) has experienced falling interest from the smart money, it’s safe to say that there was a specific group of funds that decided to sell off their full holdings heading into Q3. Intriguingly, David Brown’s Hawk Ridge Management dumped the largest investment of the “upper crust” of funds monitored by Insider Monkey, totaling about $2 million in stock, and Ken Griffin’s Citadel Investment Group was right behind this move, as the fund dropped about $1.4 million worth. These moves are intriguing to say the least, as aggregate hedge fund interest dropped by 2 funds heading into Q3.

As you can see these stocks had an average of 11.75 hedge funds with bullish positions and the average amount invested in these stocks was $135 million. That figure was $184 million in CURO’s case. ProPetro Holding Corp. (NYSE:PUMP) is the most popular stock in this table. On the other hand Sunrun Inc (NASDAQ:RUN) is the least popular one with only 8 bullish hedge fund positions. CURO Group Holdings Corp. (NYSE:CURO) is not the most popular stock in this group but hedge fund interest is still above average. This is a slightly positive signal but we’d rather spend our time researching stocks that hedge funds are piling on. In this regard PUMP might be a better candidate to consider a long position.

Is Insmed Incorporated (INSM) A Good Stock To Buy?
Monthly Newsletter Strategy
Download a free copy of our newsletter and see the details inside!
Hedge Fund Resource Center
Related News
10 Easiest Winter Olympic Sports to Qualify for 11 Countries With The Worst Modern Music In The World The Top 5 Robo Advisor Apps of 2018
Billionaire Hedge Funds