Is Crane Co. (NYSE:CR) a good stock to buy right now? We at Insider Monkey like to examine what billionaires and hedge funds think of a company before doing days of research on it. Given their 2 and 20 payment structure, hedge funds have more resources than the average investor. The funds have access to expert networks and get tips from industry insiders. They also have numerous Ivy League graduates and MBAs. Like everyone else, hedge funds perform miserably at times, but their consensus picks have historically outperformed the market after risk adjustments.

Hedge fund interest in Crane Co. (NYSE:CR) shares was flat at the end of last quarter. This is usually a negative indicator. The level and the change in hedge fund popularity aren’t the only variables you need to analyze to decipher hedge funds’ perspectives. A stock may witness a boost in popularity but it may still be less popular than similarly priced stocks. That’s why at the end of this article we will examine companies such as Foot Locker, Inc. (NYSE:FL), HubSpot Inc (NYSE:HUBS), and CIT Group Inc. (NYSE:CIT) to gather more data points.

What does the smart money think about Crane Co. (NYSE:CR)?

Heading into the fourth quarter of 2018, a total of 19 of the hedge funds tracked by Insider Monkey were long this stock, no change from the previous quarter. On the other hand, there were a total of 17 hedge funds with a bullish position in CR at the beginning of this year. With hedge funds’ sentiment swirling, there exists an “upper tier” of key hedge fund managers who were upping their holdings significantly (or already accumulated large positions). 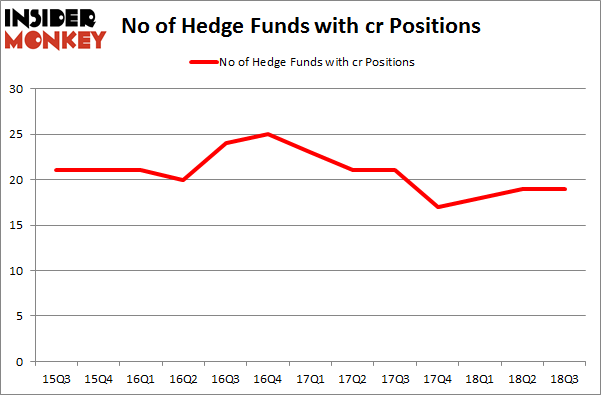 Among these funds, GAMCO Investors held the most valuable stake in Crane Co. (NYSE:CR), which was worth $220.2 million at the end of the third quarter. On the second spot was AQR Capital Management which amassed $75.5 million worth of shares. Moreover, Gardner Russo & Gardner, Two Sigma Advisors, and GLG Partners were also bullish on Crane Co. (NYSE:CR), allocating a large percentage of their portfolios to this stock.

Seeing as Crane Co. (NYSE:CR) has witnessed declining sentiment from the smart money, it’s safe to say that there exists a select few hedge funds who sold off their full holdings last quarter. At the top of the heap, Israel Englander’s Millennium Management dumped the biggest position of the “upper crust” of funds tracked by Insider Monkey, valued at about $7.6 million in stock. Matthew Tewksbury’s fund, Stevens Capital Management, also said goodbye to its stock, about $2.1 million worth. These bearish behaviors are intriguing to say the least, as aggregate hedge fund interest stayed the same (this is a bearish signal in our experience).

As you can see these stocks had an average of 26.5 hedge funds with bullish positions and the average amount invested in these stocks was $650 million. That figure was $349 million in CR’s case. Brunswick Corporation (NYSE:BC) is the most popular stock in this table. On the other hand HubSpot Inc (NYSE:HUBS) is the least popular one with only 21 bullish hedge fund positions. Compared to these stocks Crane Co. (NYSE:CR) is even less popular than HUBS. Considering that hedge funds aren’t fond of this stock in relation to other companies analyzed in this article, it may be a good idea to analyze it in detail and understand why the smart money isn’t behind this stock. This isn’t necessarily bad news. Although it is possible that hedge funds may think the stock is overpriced and view the stock as a short candidate, they may not be very familiar with the bullish thesis. In either case more research is warranted.