Is CRA International, Inc. (CRAI) A Good Stock To Buy?

CRA International, Inc. (NASDAQ:CRAI) has seen a decrease in support from the world’s most elite money managers recently. Our calculations also showed that crai isn’t among the 30 most popular stocks among hedge funds. 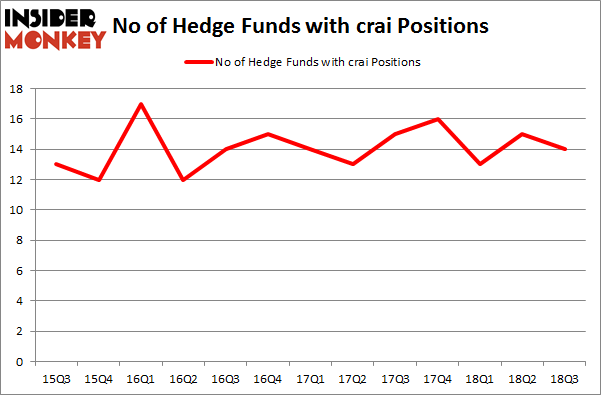 The largest stake in CRA International, Inc. (NASDAQ:CRAI) was held by Renaissance Technologies, which reported holding $27.7 million worth of stock at the end of September. It was followed by GLG Partners with a $9.4 million position. Other investors bullish on the company included AQR Capital Management, AlphaOne Capital Partners, and Arrowstreet Capital.

Seeing as CRA International, Inc. (NASDAQ:CRAI) has witnessed falling interest from hedge fund managers, logic holds that there lies a certain “tier” of hedge funds that decided to sell off their positions entirely heading into Q3. At the top of the heap, John H Lewis’s Osmium Partners dumped the biggest position of the “upper crust” of funds followed by Insider Monkey, worth an estimated $0.4 million in stock, and Matthew Hulsizer’s PEAK6 Capital Management was right behind this move, as the fund dropped about $0.2 million worth. These transactions are intriguing to say the least, as total hedge fund interest was cut by 1 funds heading into Q3.

As you can see these stocks had an average of 6.75 hedge funds with bullish positions and the average amount invested in these stocks was $38 million. That figure was $68 million in CRAI’s case. Marinus Pharmaceuticals Inc (NASDAQ:MRNS) is the most popular stock in this table. On the other hand Royce Micro-Cap Trust, Inc. (NYSE:RMT) is the least popular one with only 4 bullish hedge fund positions. Compared to these stocks CRA International, Inc. (NASDAQ:CRAI) is more popular among hedge funds. Considering that hedge funds are fond of this stock in relation to its market cap peers, it may be a good idea to analyze it in detail and potentially include it in your portfolio.