Many investors, including Paul Tudor Jones or Stan Druckenmiller, have been saying for a while now that the current market is overvalued due to a low interest rate environment that leads to companies swapping their equity for debt and focusing mostly on short-term performance such as beating the quarterly earnings estimates. In the fourth quarter, many investors lost money due to unpredictable events such as the sudden increase in long-term interest rates and unintended consequences of the trade war with China. Nevertheless, many of the stocks that tanked in the third quarter still sport strong fundamentals and their decline was more related to the general market sentiment rather than their individual performance and hedge funds kept their bullish stance. In this article we will find out how hedge fund sentiment to CorVel Corporation (NASDAQ:CRVL) changed recently.

CorVel Corporation (NASDAQ:CRVL) shares haven’t seen a lot of action during the third quarter. Overall, hedge fund sentiment was unchanged. The stock was in 11 hedge funds’ portfolios at the end of the third quarter of 2018. The level and the change in hedge fund popularity aren’t the only variables you need to analyze to decipher hedge funds’ perspectives. A stock may witness a boost in popularity but it may still be less popular than similarly priced stocks. That’s why at the end of this article we will examine companies such as Funko, Inc. (NASDAQ:FNKO), Seaspan Corporation (NYSE:SSW), and Tootsie Roll Industries, Inc. (NYSE:TR) to gather more data points. 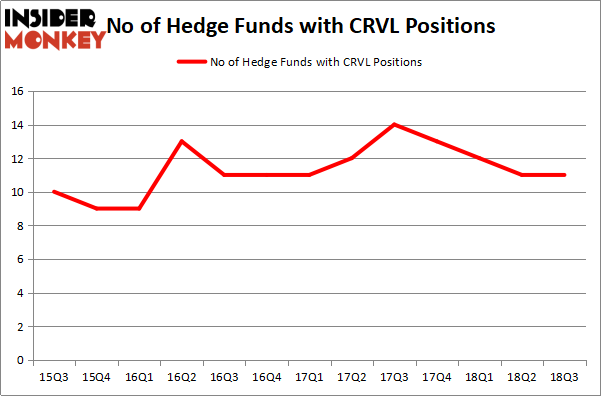 According to Insider Monkey’s hedge fund database, Renaissance Technologies, managed by Jim Simons, holds the biggest position in CorVel Corporation (NASDAQ:CRVL). Renaissance Technologies has a $87.3 million position in the stock, comprising 0.1% of its 13F portfolio. Coming in second is Ancora Advisors, led by Frederick DiSanto, holding a $7.9 million position; 0.3% of its 13F portfolio is allocated to the stock. Other members of the smart money that are bullish contain Cliff Asness’s AQR Capital Management, Noam Gottesman’s GLG Partners and Peter Algert and Kevin Coldiron’s Algert Coldiron Investors.

We view hedge fund activity in the stock unfavorable, but in this case there was only a single hedge fund selling its entire position: Balyasny Asset Management. One hedge fund selling its entire position doesn’t always imply a bearish intent. Theoretically a hedge fund may decide to sell a promising position in order to invest the proceeds in a more promising idea. However, we don’t think this is the case in this case because only one of the 800+ hedge funds tracked by Insider Monkey identified as a viable investment and initiated a position in the stock (that fund was Millennium Management).

As you can see these stocks had an average of 10.75 hedge funds with bullish positions and the average amount invested in these stocks was $125 million. That figure was $107 million in CRVL’s case. 21Vianet Group Inc (NASDAQ:VNET) is the most popular stock in this table. On the other hand Seaspan Corporation (NYSE:SSW) is the least popular one with only 8 bullish hedge fund positions. CorVel Corporation (NASDAQ:CRVL) is not the most popular stock in this group but hedge fund interest is still above average. This is a slightly positive signal but we’d rather spend our time researching stocks that hedge funds are piling on. In this regard VNET might be a better candidate to consider a long position.