It looks like one of those leaps in technology that puts you right in the middle of Tom Cruise’s “Minority Report” movie: glass so flexible you can roll it up and tuck it in your shirt pocket.

Corning Incorporated (NYSE:GLW) unveiled the next-generation development last June and many believed it would drive innovation in completely new directions. A new Apple Inc. (NASDAQ:AAPL) iWatch, for example, with a glass face that matched the curvature of your wrist, would be a perfect complement to the technology. Unfortunately, the glassmaker doused the enthusiasm with cold water last month, saying it might be as long as three years before consumer product manufacturers really adopted it as their own. There might still be a wristband in the works, but it’s not likely to feature the new flexible Willow glass.

The 800-pound gorilla
Up until now, investor focus has primarily been on Corning Incorporated (NYSE:GLW)’s Gorilla Glass, the tough-as-nails glass that is featured on some 1.2 billion devices from 33 brands across 900 different products. And it will still be the centerpiece of the glassmaker’s immediate future as its third iteration proves to be the strongest yet. However, as the Fool’s tech guru Eric Bleeker notes, despite the incredible achievements Gorilla Glass has already delivered, because smartphones have such a small footprint, relatively speaking, even large-volume sales tend not to move the needle as much as you’d expect.

Were those billion GG devices all big screen, flat-panel TVs, Corning Incorporated (NYSE:GLW) would likely have banked a heckuva lot more than the $1 billion in segment revenues it did in 2012. As it was, the LCD division saw revenues tumble 7.5%. Fortunately, that was offset by double-digit growth in Gorilla Glass as the specialty materials division’s revenues surged 25% over the year-ago period.

Hemlock society
What many investors might not realize is the collapse in polysilicon pricing that’s wreaking havoc in the solar industry is also taking its toll on Corning. The glassmaker’s Hemlock Semiconductor subsidiary produces polysilicon through a 50% joint venture with The Dow Chemical Company (NYSE:DOW) and revenues at Dow Corning fell 5% last year. Worse, gross profits plunged 30% and net income lost three-quarters of its value.

As a result, its biggest moneymaker is failing to gain traction and its supplemental businesses are seeing profits plummet, leading Corning’s shares to essentially flatline over the past year. 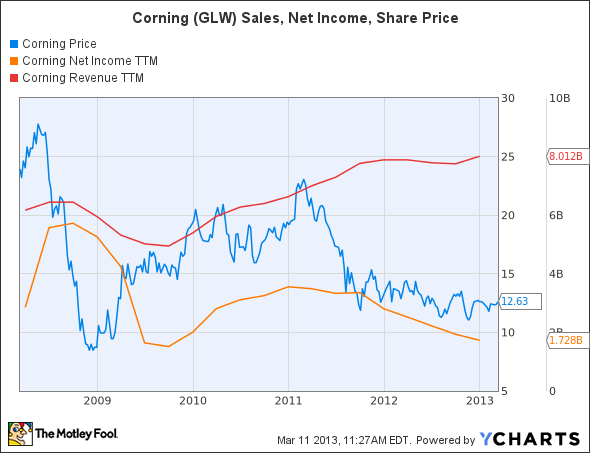 Despite the challenges, though, Corning’s future still looks crystal clear. Yes, the solar industry is covered by storm clouds and Corning has taken some writedowns related to Hemlock — and may do so again this year — but the rest of the business is shaping up as a strong competitor. Even in the LCD glass division, “less bad” results really mean things are getting better.