Is Cooper-Standard Holdings Inc (CPS) A Good Stock To Buy?

The Insider Monkey team has completed processing the quarterly 13F filings for the March quarter submitted by the hedge funds and other money managers included in our extensive database. Most hedge fund investors experienced strong gains on the back of a strong market performance, which certainly propelled them to adjust their equity holdings so as to maintain the desired risk profile. As a result, the relevancy of these public filings and their content is indisputable, as they may reveal numerous high-potential stocks. The following article will discuss the smart money sentiment towards Cooper-Standard Holdings Inc (NYSE:CPS).

Cooper-Standard Holdings Inc (NYSE:CPS) has experienced a decrease in support from the world’s most elite money managers recently. Our calculations also showed that CPS isn’t among the 30 most popular stocks among hedge funds.

How have hedgies been trading Cooper-Standard Holdings Inc (NYSE:CPS)? 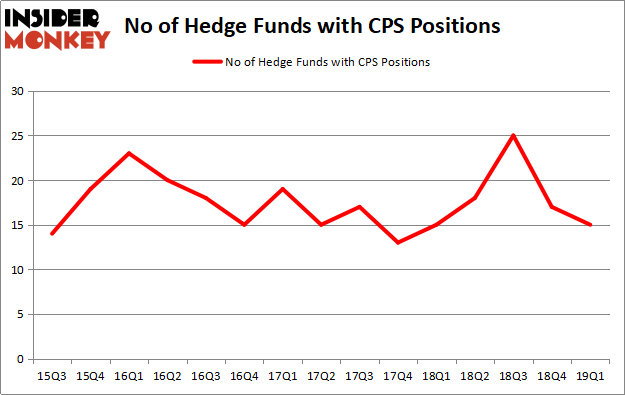 The largest stake in Cooper-Standard Holdings Inc (NYSE:CPS) was held by Royce & Associates, which reported holding $10.1 million worth of stock at the end of March. It was followed by Arrowstreet Capital with a $6.1 million position. Other investors bullish on the company included Levin Capital Strategies, Two Sigma Advisors, and D E Shaw.

Since Cooper-Standard Holdings Inc (NYSE:CPS) has witnessed falling interest from the aggregate hedge fund industry, logic holds that there was a specific group of funds that decided to sell off their full holdings by the end of the third quarter. At the top of the heap, Noam Gottesman’s GLG Partners sold off the largest investment of the “upper crust” of funds monitored by Insider Monkey, worth about $1.5 million in stock, and Jim Simons’s Renaissance Technologies was right behind this move, as the fund dropped about $0.6 million worth. These bearish behaviors are interesting, as aggregate hedge fund interest fell by 2 funds by the end of the third quarter.

As you can see these stocks had an average of 11 hedge funds with bullish positions and the average amount invested in these stocks was $145 million. That figure was $41 million in CPS’s case. Monotype Imaging Holdings Inc. (NASDAQ:TYPE) is the most popular stock in this table. On the other hand Weidai Ltd. (NYSE:WEI) is the least popular one with only 1 bullish hedge fund positions. Cooper-Standard Holdings Inc (NYSE:CPS) is not the most popular stock in this group but hedge fund interest is still above average. This is a slightly positive signal but we’d rather spend our time researching stocks that hedge funds are piling on. Our calculations showed that top 20 most popular stocks among hedge funds returned 6.2% in Q2 through June 19th and outperformed the S&P 500 ETF (SPY) by nearly 3 percentage points. Unfortunately CPS wasn’t nearly as popular as these 20 stocks and hedge funds that were betting on CPS were disappointed as the stock returned -11.5% during the same period and underperformed the market. If you are interested in investing in large cap stocks with huge upside potential, you should check out the top 20 most popular stocks among hedge funds as 13 of these stocks already outperformed the market so far in Q2.