Is ContraFect Corp (CFRX) A Good Stock To Buy?

ContraFect Corp (NASDAQ:CFRX) shares haven’t seen a lot of action during the third quarter. Overall, hedge fund sentiment was unchanged. The stock was in 10 hedge funds’ portfolios at the end of September. At the end of this article we will also compare CFRX to other stocks including Franklin Universal Trust (NYSE:FT), Mediwound Ltd (NASDAQ:MDWD), and Nature’s Sunshine Prod. (NASDAQ:NATR) to get a better sense of its popularity.

What have hedge funds been doing with ContraFect Corp (NASDAQ:CFRX)? 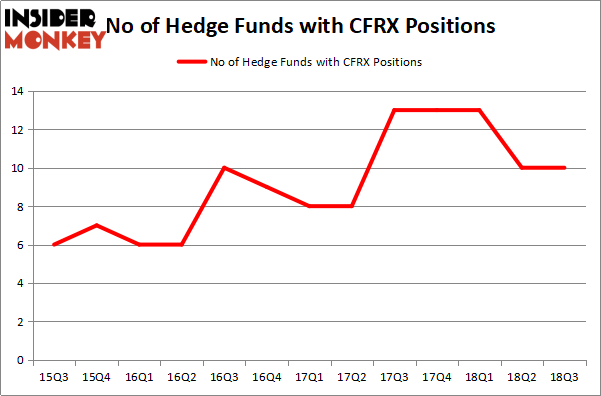 More specifically, Baker Bros. Advisors was the largest shareholder of ContraFect Corp (NASDAQ:CFRX), with a stake worth $14.8 million reported as of the end of September. Trailing Baker Bros. Advisors was Biotechnology Value Fund / BVF Inc, which amassed a stake valued at $7.2 million. Adage Capital Management, Cormorant Asset Management, and 683 Capital Partners were also very fond of the stock, giving the stock large weights in their portfolios.

As you can see these stocks had an average of 3.25 hedge funds with bullish positions and the average amount invested in these stocks was $18 million. That figure was $42 million in CFRX’s case. Nature’s Sunshine Prod. (NASDAQ:NATR) is the most popular stock in this table. On the other hand Franklin Universal Trust (NYSE:FT) is the least popular one with only 2 bullish hedge fund positions. Compared to these stocks ContraFect Corp (NASDAQ:CFRX) is more popular among hedge funds. Considering that hedge funds are fond of this stock in relation to its market cap peers, it may be a good idea to analyze it in detail and potentially include it in your portfolio.