Is Constellium SE (CSTM) Going to Burn These Hedge Funds?

Insider Monkey has processed numerous 13F filings of hedge funds and successful value investors to create an extensive database of hedge fund holdings. The 13F filings show the hedge funds’ and successful investors’ positions as of the end of the first quarter. You can find articles about an individual hedge fund’s trades on numerous financial news websites. However, in this article we will take a look at their collective moves over the last 4.5 years and analyze what the smart money thinks of Constellium SE (NYSE:CSTM) based on that data.

Constellium SE (NYSE:CSTM) was in 34 hedge funds’ portfolios at the end of March. CSTM has experienced a decrease in enthusiasm from smart money of late. There were 50 hedge funds in our database with CSTM positions at the end of the previous quarter. Our calculations also showed that CSTM isn’t among the 30 most popular stocks among hedge funds (click for Q1 rankings and see the video for a quick look at the top 5 stocks).

In the eyes of most traders, hedge funds are seen as worthless, old financial vehicles of the past. While there are over 8000 funds trading at the moment, We look at the bigwigs of this club, around 850 funds. Most estimates calculate that this group of people direct most of the smart money’s total capital, and by tracking their first-class equity investments, Insider Monkey has deciphered several investment strategies that have historically outperformed Mr. Market. Insider Monkey’s flagship short hedge fund strategy outrun the S&P 500 short ETFs by around 20 percentage points per year since its inception in March 2017. Our portfolio of short stocks lost 36% since February 2017 (through May 18th) even though the market was up 30% during the same period. We just shared a list of 8 short targets in our latest quarterly update .

At Insider Monkey we leave no stone unturned when looking for the next great investment idea. For example, 2020’s unprecedented market conditions provide us with the highest number of trading opportunities in a decade. So we are checking out trades like this one. We interview hedge fund managers and ask them about their best ideas. If you want to find out the best healthcare stock to buy right now, you can watch our latest hedge fund manager interview here. We read hedge fund investor letters and listen to stock pitches at hedge fund conferences. Our best call in 2020 was shorting the market when the S&P 500 was trading at 3150 after realizing the coronavirus pandemic’s significance before most investors. Now we’re going to take a look at the recent hedge fund action encompassing Constellium SE (NYSE:CSTM).

What have hedge funds been doing with Constellium SE (NYSE:CSTM)? 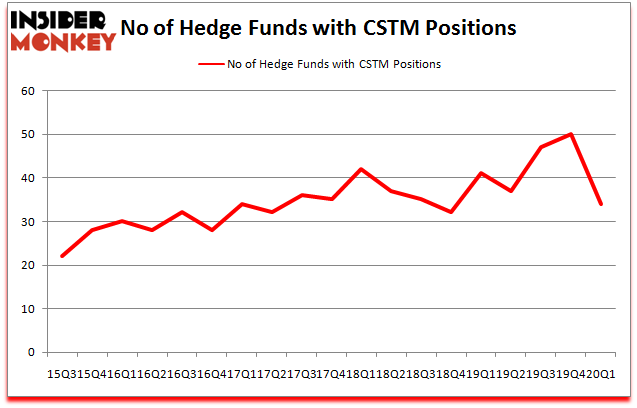 When looking at the institutional investors followed by Insider Monkey, Jared Nussbaum’s Nut Tree Capital has the number one position in Constellium SE (NYSE:CSTM), worth close to $21.1 million, accounting for 9.5% of its total 13F portfolio. Sitting at the No. 2 spot is Park West Asset Management, managed by Peter S. Park, which holds a $16.7 million position; 1.1% of its 13F portfolio is allocated to the company. Remaining professional money managers that are bullish contain Mark Kingdon’s Kingdon Capital, Ed Bosek’s BeaconLight Capital and Don Morgan’s Brigade Capital. In terms of the portfolio weights assigned to each position Bronson Point Partners allocated the biggest weight to Constellium SE (NYSE:CSTM), around 15.04% of its 13F portfolio. Nut Tree Capital is also relatively very bullish on the stock, dishing out 9.47 percent of its 13F equity portfolio to CSTM.

Since Constellium SE (NYSE:CSTM) has experienced declining sentiment from the aggregate hedge fund industry, we can see that there is a sect of hedgies who were dropping their entire stakes heading into Q4. At the top of the heap, David Rosen’s Rubric Capital Management said goodbye to the largest investment of the 750 funds watched by Insider Monkey, valued at an estimated $23.2 million in stock, and Robert Polak’s Anchor Bolt Capital was right behind this move, as the fund said goodbye to about $16.3 million worth. These transactions are important to note, as total hedge fund interest dropped by 16 funds heading into Q4.

As you can see these stocks had an average of 16 hedge funds with bullish positions and the average amount invested in these stocks was $85 million. That figure was $141 million in CSTM’s case. Transocean Ltd (NYSE:RIG) is the most popular stock in this table. On the other hand The Providence Service Corporation (NASDAQ:PRSC) is the least popular one with only 11 bullish hedge fund positions. Compared to these stocks Constellium SE (NYSE:CSTM) is more popular among hedge funds. Our calculations showed that top 10 most popular stocks among hedge funds returned 41.4% in 2019 and outperformed the S&P 500 ETF (SPY) by 10.1 percentage points. These stocks returned 8.3% in 2020 through the end of May but still managed to beat the market by 13.2 percentage points. Hedge funds were also right about betting on CSTM as the stock returned 57.6% so far in Q2 (through the end of May) and outperformed the market by an even larger margin. Hedge funds were clearly right about piling into this stock relative to other stocks with similar market capitalizations.