Is Comerica Incorporated (CMA) Going to Burn These Hedge Funds?

Is Comerica Incorporated (NYSE:CMA) an excellent stock to buy now? The smart money is taking a pessimistic view. The number of bullish hedge fund positions decreased by 6 in recent months. Our calculations also showed that CMA isn’t among the 30 most popular stocks among hedge funds.

Heading into the fourth quarter of 2018, a total of 37 of the hedge funds tracked by Insider Monkey held long positions in this stock, a change of -14% from one quarter earlier. Below, you can check out the change in hedge fund sentiment towards CMA over the last 13 quarters. So, let’s review which hedge funds were among the top holders of the stock and which hedge funds were making big moves. 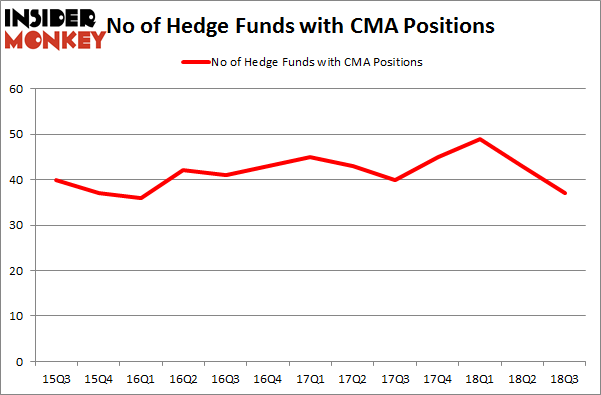 Of the funds tracked by Insider Monkey, Israel Englander’s Millennium Management has the largest position in Comerica Incorporated (NYSE:CMA), worth close to $333.4 million, comprising 0.4% of its total 13F portfolio. The second largest stake is held by Citadel Investment Group, managed by Ken Griffin, which holds a $100.9 million position; the fund has less than 0.1%% of its 13F portfolio invested in the stock. Some other hedge funds and institutional investors with similar optimism contain Peter Rathjens, Bruce Clarke and John Campbell’s Arrowstreet Capital, John Overdeck and David Siegel’s Two Sigma Advisors and D. E. Shaw’s D E Shaw.

Because Comerica Incorporated (NYSE:CMA) has faced falling interest from the entirety of the hedge funds we track, we can see that there were a few fund managers who sold off their entire stakes in the third quarter. At the top of the heap, Robert Pohly’s Samlyn Capital said goodbye to the biggest investment of the 700 funds followed by Insider Monkey, totaling an estimated $25.7 million in stock. Ravi Chopra’s fund, Azora Capital, also dumped its stock, about $21.4 million worth. These bearish behaviors are important to note, as aggregate hedge fund interest was cut by 6 funds in the third quarter.

As you can see these stocks had an average of 25.25 hedge funds with bullish positions and the average amount invested in these stocks was $838 million. That figure was $928 million in CMA’s case. Discovery Communications Inc. (NASDAQ:DISCK) is the most popular stock in this table. On the other hand Magellan Midstream Partners, L.P. (NYSE:MMP) is the least popular one with only 14 bullish hedge fund positions. Compared to these stocks Comerica Incorporated (NYSE:CMA) is more popular among hedge funds. Considering that hedge funds are fond of this stock in relation to its market cap peers, it may be a good idea to analyze it in detail and potentially include it in your portfolio.