We can judge whether Comcast Corporation (NASDAQ:CMCSA) is a good investment right now by following the lead of some of the best investors in the world and piggybacking their ideas. We know coronavirus is probably the #1 concern in your mind right now. It should be. We estimate that COVID-19 will kill around 5 million people worldwide and there is actually a 3.3% probability that president Donald Trump will die from the new coronavirus (see the details). Coronavirus will probably cause a short recession and then things will get back to business as usual. That’s why we believe you should use this opportunity to identify the best stocks to invest for the future and add them to your portfolio at increasingly attractive prices. How do we find high quality stocks? There’s no better way to get hedge funds’ immense resources and analytical capabilities working for us than to follow their lead into their best ideas. While not all of these picks will be winners, our research shows that these picks historically outperformed the market when we factor in known risk factors.

Comcast Corporation (NASDAQ:CMCSA) investors should be aware of a decrease in activity from the world’s largest hedge funds of late. Our calculations also showed that CMCSA currently ranks 25th among the 30 most popular stocks among hedge funds (click for Q4 rankings and see the video below for Q3 rankings).

We leave no stone unturned when looking for the next great investment idea. For example Europe is set to become the world’s largest cannabis market, so we check out this European marijuana stock pitch. We read hedge fund investor letters and listen to stock pitches at hedge fund conferences, and and go through short-term trade recommendations like this one. We even check out the recommendations of services with hard to believe track records. In January, we recommended a long position in one of the most shorted stocks in the market, and that stock returned nearly 50% despite the large losses in the market since our recommendation. Now we’re going to analyze the new hedge fund action encompassing Comcast Corporation (NASDAQ:CMCSA). 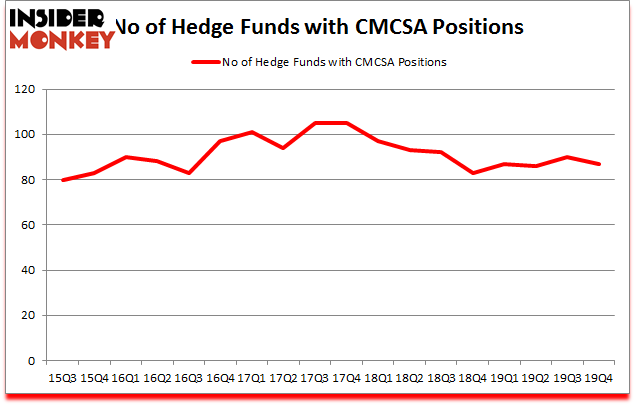 More specifically, Eagle Capital Management was the largest shareholder of Comcast Corporation (NASDAQ:CMCSA), with a stake worth $1593.8 million reported as of the end of September. Trailing Eagle Capital Management was First Pacific Advisors LLC, which amassed a stake valued at $468 million. BlueSpruce Investments, Arrowstreet Capital, and Citadel Investment Group were also very fond of the stock, becoming one of the largest hedge fund holders of the company. In terms of the portfolio weights assigned to each position 3G Capital allocated the biggest weight to Comcast Corporation (NASDAQ:CMCSA), around 27.4% of its 13F portfolio. BlueDrive Global Investors is also relatively very bullish on the stock, designating 17.98 percent of its 13F equity portfolio to CMCSA.

Judging by the fact that Comcast Corporation (NASDAQ:CMCSA) has experienced bearish sentiment from the aggregate hedge fund industry, we can see that there were a few hedgies who sold off their full holdings in the third quarter. Intriguingly, Andrew Immerman and Jeremy Schiffman’s Palestra Capital Management sold off the biggest investment of the 750 funds tracked by Insider Monkey, comprising about $155 million in stock. Daniel Lascano’s fund, Lomas Capital Management, also said goodbye to its stock, about $53.3 million worth. These moves are intriguing to say the least, as aggregate hedge fund interest dropped by 3 funds in the third quarter.

Let’s check out hedge fund activity in other stocks – not necessarily in the same industry as Comcast Corporation (NASDAQ:CMCSA) but similarly valued. These stocks are Cisco Systems, Inc. (NASDAQ:CSCO), Toyota Motor Corporation (NYSE:TM), PepsiCo, Inc. (NASDAQ:PEP), and The Boeing Company (NYSE:BA). This group of stocks’ market valuations are closest to CMCSA’s market valuation.

As you can see these stocks had an average of 55.25 hedge funds with bullish positions and the average amount invested in these stocks was $2561 million. That figure was $6748 million in CMCSA’s case. The Boeing Company (NYSE:BA) is the most popular stock in this table. On the other hand Toyota Motor Corporation (NYSE:TM) is the least popular one with only 12 bullish hedge fund positions. Compared to these stocks Comcast Corporation (NASDAQ:CMCSA) is more popular among hedge funds. Our calculations showed that top 20 most popular stocks among hedge funds returned 41.3% in 2019 and outperformed the S&P 500 ETF (SPY) by 10.1 percentage points. These stocks also gained 0.1% in 2020 through March 2nd and beat the market by 4.1 percentage points. Unfortunately CMCSA wasn’t nearly as popular as these 20 stocks and hedge funds that were betting on CMCSA were disappointed as the stock returned -5% during the first two months of 2020 (through March 2nd) and underperformed the market. If you are interested in investing in large cap stocks with huge upside potential, you should check out the top 20 most popular stocks among hedge funds as most of these stocks already outperformed the market in Q1.

Hedge Funds Have Never Been This Bullish On UnitedHealth Group Inc. (UNH)