Is Coeur Mining, Inc. (CDE) A Good Stock To Buy?

Is Coeur Mining, Inc. (NYSE:CDE) a bargain? Investors who are in the know are in a pessimistic mood. The number of bullish hedge fund bets dropped by 2 recently. Our calculations also showed that cde isn’t among the 30 most popular stocks among hedge funds.

At the moment there are a multitude of gauges stock traders put to use to analyze stocks. Some of the most useful gauges are hedge fund and insider trading indicators. Our researchers have shown that, historically, those who follow the best picks of the top fund managers can outpace their index-focused peers by a significant amount (see the details here).

At Q1’s end, a total of 11 of the hedge funds tracked by Insider Monkey held long positions in this stock, a change of -15% from one quarter earlier. The graph below displays the number of hedge funds with bullish position in CDE over the last 15 quarters. With the smart money’s capital changing hands, there exists an “upper tier” of notable hedge fund managers who were adding to their stakes significantly (or already accumulated large positions). 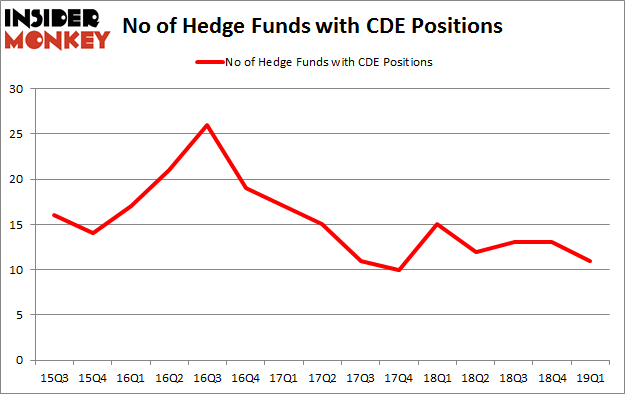 More specifically, Renaissance Technologies was the largest shareholder of Coeur Mining, Inc. (NYSE:CDE), with a stake worth $10.2 million reported as of the end of March. Trailing Renaissance Technologies was D E Shaw, which amassed a stake valued at $4 million. Sprott Asset Management, Sloane Robinson Investment Management, and Arrowstreet Capital were also very fond of the stock, giving the stock large weights in their portfolios.

Because Coeur Mining, Inc. (NYSE:CDE) has experienced falling interest from the entirety of the hedge funds we track, logic holds that there were a few hedge funds that decided to sell off their positions entirely heading into Q3. Interestingly, Thomas E. Claugus’s GMT Capital dropped the biggest position of all the hedgies followed by Insider Monkey, comprising an estimated $4.7 million in stock. Paul Marshall and Ian Wace’s fund, Marshall Wace LLP, also cut its stock, about $3.8 million worth. These transactions are intriguing to say the least, as total hedge fund interest was cut by 2 funds heading into Q3.

As you can see these stocks had an average of 9.5 hedge funds with bullish positions and the average amount invested in these stocks was $41 million. That figure was $25 million in CDE’s case. Malibu Boats Inc (NASDAQ:MBUU) is the most popular stock in this table. On the other hand Goldman Sachs BDC, Inc. (NYSE:GSBD) is the least popular one with only 1 bullish hedge fund positions. Coeur Mining, Inc. (NYSE:CDE) is not the most popular stock in this group but hedge fund interest is still above average. This is a slightly positive signal but we’d rather spend our time researching stocks that hedge funds are piling on. Our calculations showed that top 20 most popular stocks among hedge funds returned 6.2% in Q2 through June 19th and outperformed the S&P 500 ETF (SPY) by nearly 3 percentage points. Unfortunately CDE wasn’t nearly as popular as these 20 stocks and hedge funds that were betting on CDE were disappointed as the stock returned -9.8% during the same period and underperformed the market. If you are interested in investing in large cap stocks with huge upside potential, you should check out the top 20 most popular stocks among hedge funds as 13 of these stocks already outperformed the market so far in Q2.