Hedge Funds and other institutional investors have just completed filing their 13Fs with the Securities and Exchange Commission, revealing their equity portfolios as of the end of September. At Insider Monkey, we follow over 700 of the best-performing investors and by analyzing their 13F filings, we can determine the stocks that they are collectively bullish on. One of their picks is CNO Financial Group Inc (NYSE:CNO), so let’s take a closer look at the sentiment that surrounds it in the current quarter.

CNO Financial Group Inc (NYSE:CNO) has experienced a decrease in hedge fund sentiment lately. Our calculations also showed that cno isn’t among the 30 most popular stocks among hedge funds.

What does the smart money think about CNO Financial Group Inc (NYSE:CNO)? 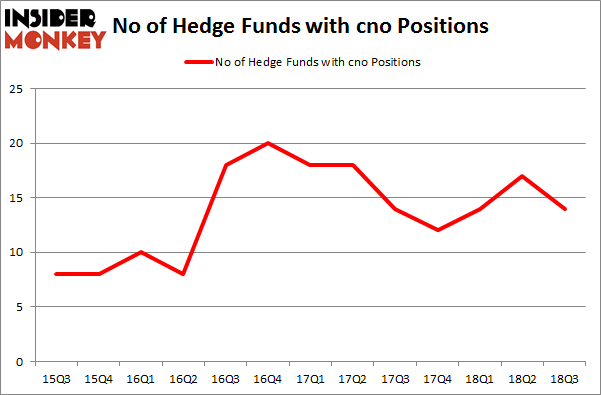 Because CNO Financial Group Inc (NYSE:CNO) has witnessed declining sentiment from hedge fund managers, it’s easy to see that there was a specific group of hedge funds that elected to cut their full holdings by the end of the third quarter. Intriguingly, Peter Seuss’s Prana Capital Management dropped the biggest position of the 700 funds tracked by Insider Monkey, comprising an estimated $5.6 million in stock. Peter Rathjens, Bruce Clarke and John Campbell’s fund, Arrowstreet Capital, also dropped its stock, about $5.3 million worth. These bearish behaviors are intriguing to say the least, as aggregate hedge fund interest was cut by 3 funds by the end of the third quarter.

As you can see these stocks had an average of 17.75 hedge funds with bullish positions and the average amount invested in these stocks was $871 million. That figure was $144 million in CNO’s case. Performance Food Group Company (NYSE:PFGC) is the most popular stock in this table. On the other hand Crescent Point Energy Corp (NYSE:CPG) is the least popular one with only 12 bullish hedge fund positions. CNO Financial Group Inc (NYSE:CNO) is not the least popular stock in this group but hedge fund interest is still below average. This is a slightly negative signal and we’d rather spend our time researching stocks that hedge funds are piling on. In this regard PFGC might be a better candidate to consider a long position.