Is Civeo Corporation (Canada) (CVEO) A Good Stock To Buy?

After several tireless days, we have finished crunching the numbers from the more than 700 13F filings issued by the elite hedge funds and other investment firms that we track at Insider Monkey, which disclosed those firms’ equity portfolios as of September 30. The results of that effort will be put on display in this article, as we share valuable insight into the smart money sentiment towards Civeo Corporation (Canada) (NYSE:CVEO).

Civeo Corporation (Canada) (NYSE:CVEO) shares haven’t seen a lot of action during the third quarter. Overall, hedge fund sentiment was unchanged. The stock was in 12 hedge funds’ portfolios at the end of September.  Our calculations show that the company was not one of the 30 most popular stocks among hedge funds.

The level and the change in hedge fund popularity aren’t the only variables you need to analyze to decipher hedge funds’ perspectives. A stock may witness a boost in popularity but it may still be less popular than similarly priced stocks. That’s why at the end of this article we will examine companies such as DXP Enterprises Inc (NASDAQ:DXPE), and to gather more data points.

To the average investor, there are several formulas stock market investors use to analyze their stock investments. A couple of the best formulas are hedge fund and insider trading moves. Our experts have shown that, historically, those who follow the best picks of the elite investment managers can beat their index-focused peers by a significant margin (see the details here).

“Civeo Corp. provides temporary accommodations and hospitality services in remote areas, primarily to the oil services industry in Canada and the US, and the metallurgical coal industry in Australia. These are typically under multi-year contracts. Both markets have suffered meaningfully due to declining commodity prices, which forced producers to cut back on the capital expenditures that are the key drivers for Civeo’s business (resource development projects, infrastructure buildouts, among others). As a result, earnings have fallen dramatically – even revenues in 2016 were down almost two-thirds since 2012 – in turn causing balance sheet concerns due to relatively high leverage (debt was equal to 4.4x EBITDA as of 9/30/2017). The share price declined by more than 90% between late 2014 and early 2016.

Once oil prices stabilized, one could see a path for Civeo to not only survive the current environment but for shareholders to earn a tremendous rate of return if the market were to recover. The company maintained a meaningful baseline of business throughout the bottom of the cycle and was able to generate free cash flow of $30 million per year, despite the poor environment. This was not obvious to casual observers, however, as stated earnings were significantly negative during this period due to large non-cash impairment charges. Its free cash flow yield, though, was well in excess of 10% (relative to the market capitalization at the time) and seemed sufficient for the company to service its debt. In other words, even absent a recovery in the oil and metallurgical coal markets, shareholders could earn an adequate rate of return should Civeo simply continue to generate the current level of free cash flow and pay down its debt.”

What have hedge funds been doing with Civeo Corporation (Canada) (NYSE:CVEO)? 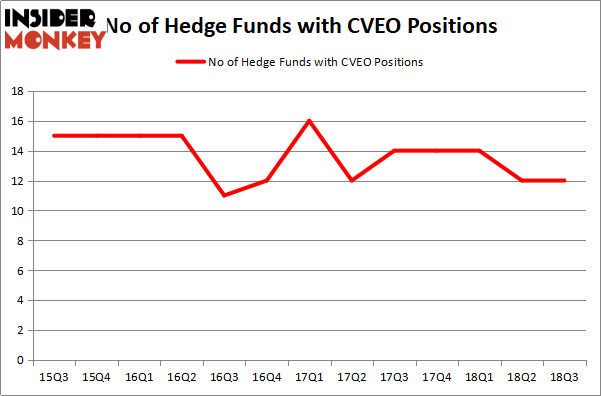 More specifically, Horizon Asset Management was the largest shareholder of Civeo Corporation (Canada) (NYSE:CVEO), with a stake worth $173.2 million reported as of the end of September. Trailing Horizon Asset Management was Renaissance Technologies, which amassed a stake valued at $39.8 million. Prescott Group Capital Management, DC Capital Partners, and D E Shaw were also very fond of the stock, giving the stock large weights in their portfolios.

Seeing as Civeo Corporation (Canada) (NYSE:CVEO) has experienced declining sentiment from hedge fund managers, it’s safe to say that there was a specific group of funds who sold off their positions entirely by the end of the third quarter. It’s worth mentioning that Israel Englander’s Millennium Management sold off the largest investment of the “upper crust” of funds followed by Insider Monkey, valued at an estimated $1.4 million in stock. Joel Greenblatt’s fund, Gotham Asset Management, also sold off its stock, about $0.2 million worth. These moves are intriguing to say the least, as aggregate hedge fund interest stayed the same (this is a bearish signal in our experience).

As you can see these stocks had an average of 12.75 hedge funds with bullish positions and the average amount invested in these stocks was $55 million. That figure was $260 million in CVEO’s case. 0 is the most popular stock in this table. On the other hand 0 is the least popular one with only 6 bullish hedge fund positions. Civeo Corporation (Canada) (NYSE:CVEO) is not the least popular stock in this group but hedge fund interest is still below average. This is a slightly negative signal and we’d rather spend our time researching stocks that hedge funds are piling on. In this regard UPLD might be a better candidate to consider a long position.

Is PotlatchDeltic Corporation (PCH) A Good Stock To Buy?
Monthly Newsletter Strategy
Download a free copy of our newsletter and see the details inside!
Hedge Fund Resource Center
Related News
Top 15 Caffeine Addicted Countries with the Highest Coffee Consumption in the World 16 Countries With The Biggest Oil Reserves In The World in 2017 10 Countries That Owe the US the Most Money Is Just Energy Group Inc (JE) A Good Stock to Buy? Has the Time Come to Get Out of Civeo Corporation (Canada) (CVEO)? 8 Countries That Produce the Most Paper in the World 8 Countries that Produce the Most Salt in the World The 10 Best Islands to Visit in 2019 5 Most Socially Responsible Companies in America 5 Ways You Can Eliminate Credit Card Debt
Billionaire Hedge Funds