Is City Office REIT Inc (NYSE:CIO) a good bet right now? We like to analyze hedge fund sentiment before doing days of in-depth research. We do so because hedge funds and other elite investors have numerous Ivy league graduates, expert network advisers, and supply chain tipsters working or consulting for them. There is not a shortage of news stories covering failed hedge fund investments and it is a fact that hedge funds’ picks don’t beat the market 100% of the time, but their consensus picks have historically done very well and have outperformed the market after adjusting for risk.

City Office REIT Inc (NYSE:CIO) has experienced a decrease in enthusiasm from smart money lately. CIO was in 6 hedge funds’ portfolios at the end of the third quarter of 2018. There were 7 hedge funds in our database with CIO positions at the end of the previous quarter. Our calculations also showed that CIO isn’t among the 30 most popular stocks among hedge funds.

What does the smart money think about City Office REIT Inc (NYSE:CIO)? 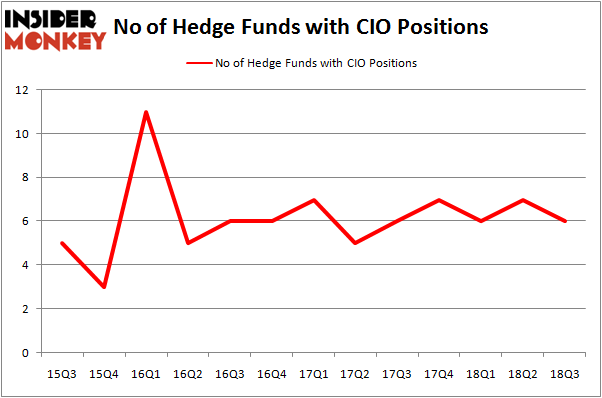 More specifically, Renaissance Technologies was the largest shareholder of City Office REIT Inc (NYSE:CIO), with a stake worth $24.7 million reported as of the end of September. Trailing Renaissance Technologies was Millennium Management, which amassed a stake valued at $1.5 million. Marathon Asset Management, Citadel Investment Group, and AQR Capital Management were also very fond of the stock, giving the stock large weights in their portfolios.

Due to the fact that City Office REIT Inc (NYSE:CIO) has witnessed bearish sentiment from the smart money, we can see that there was a specific group of fund managers who were dropping their entire stakes last quarter. Intriguingly, John Overdeck and David Siegel’s Two Sigma Advisors sold off the largest stake of all the hedgies monitored by Insider Monkey, worth an estimated $0.6 million in stock. Dmitry Balyasny’s fund, Balyasny Asset Management, also dumped its stock, about $0.2 million worth. These transactions are important to note, as aggregate hedge fund interest dropped by 1 funds last quarter.

As you can see these stocks had an average of 10.5 hedge funds with bullish positions and the average amount invested in these stocks was $68 million. That figure was $29 million in CIO’s case. Gogo Inc (NASDAQ:GOGO) is the most popular stock in this table. On the other hand ZIOPHARM Oncology Inc. (NASDAQ:ZIOP) is the least popular one with only 6 bullish hedge fund positions. Compared to these stocks City Office REIT Inc (NYSE:CIO) is even less popular than ZIOP. Considering that hedge funds aren’t fond of this stock in relation to other companies analyzed in this article, it may be a good idea to analyze it in detail and understand why the smart money isn’t behind this stock. This isn’t necessarily bad news. Although it is possible that hedge funds may think the stock is overpriced and view the stock as a short candidate, they may not be very familiar with the bullish thesis. In either case more research is warranted.