Is Citigroup Inc. (C) A Good Stock To Buy Now?

Like everyone else, elite investors make mistakes. Some of their top consensus picks, such as Amazon, Facebook and Alibaba, have not done well in October due to various reasons. Nevertheless, the data show elite investors’ consensus picks have done well on average over the long-term. The top 25 S&P 500 stocks among hedge funds at the end of June 2016 lost an average of 8.8% through October 26th whereas the average stock in the S&P 500 Index lost 9.5% during the same period. Because their consensus picks have done well, we pay attention to what elite funds think before doing extensive research on a stock. In this article, we take a closer look at Citigroup Inc. (NYSE:C) from the perspective of those elite funds.

We’re going to take a glance at the fresh hedge fund action regarding Citigroup Inc. (NYSE:C).

At the end of the third quarter, a total of 92 of the hedge funds tracked by Insider Monkey were bullish on this stock, a change of -7% from the previous quarter. Below, you can check out the change in hedge fund sentiment towards C over the last 6 quarters. With hedgies’ positions undergoing their usual ebb and flow, there exists a few key hedge fund managers who were increasing their stakes meaningfully (or already accumulated large positions). 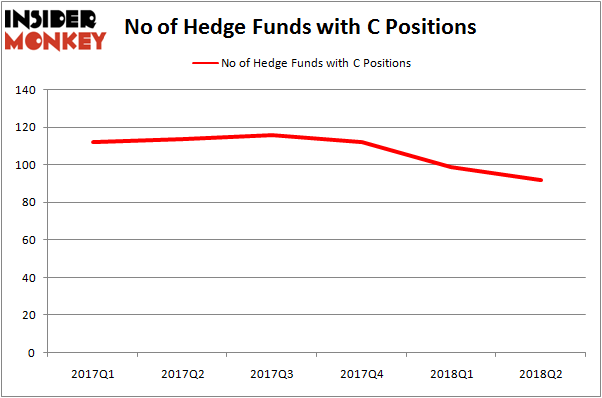 Among these funds, ValueAct Capital held the most valuable stake in Citigroup Inc. (NYSE:C), which was worth $1.7 billions at the end of the second quarter. On the second spot was Eagle Capital Management which amassed $1397.8 millions worth of shares. Moreover, Tegean Capital Management, Seminole Capital (Investment Mgmt), and Greenhaven Associates were also bullish on Citigroup Inc. (NYSE:C), allocating a large percentage of their portfolios to this stock.

Since Citigroup Inc. (NYSE:C) has witnessed falling interest from the entirety of the hedge funds we track, logic holds that there is a sect of hedgies that decided to sell off their entire stakes last quarter. Intriguingly, Kahn Brothers cut the largest stake of the “upper crust” of funds tracked by Insider Monkey, totaling about $64 million in stock, and Peter Rathjens, Bruce Clarke and John Campbell’s Arrowstreet Capital was right behind this move, as the fund dropped about $29.1 million worth. These bearish behaviors are intriguing to say the least, as total hedge fund interest fell by 7 funds last quarter.

As you can see these stocks had an average of 39.75 hedge funds with bullish positions and the average amount invested in these stocks was $3833 million. That figure was $9977 million in C’s case. Netflix, Inc. (NASDAQ:NFLX) is the most popular stock in this table. On the other hand TOTAL S.A. (ADR) (NYSE:TOT) is the least popular one with only 13 bullish hedge fund positions. Compared to these stocks Citigroup Inc. (NYSE:C) is more popular among hedge funds. More significantly, we have tremendous respect for ValueAct which managed to turn around tech laggards such as Adobe and Microsoft to deliver huge returns. “Based on the share price at which we have been able to accumulate our stake in the company, we do not believe the market views Citigroup in the same way we do,” Jeff Ubben said in an investor letter.

Considering that hedge funds are fond of this stock in relation to its market cap peers and Citigroup shares are trading at near its 52-week low, it may be a good idea to analyze it in detail and potentially include it in your portfolio. We are in an increasing interest rate environment and this should positively affect the stock prices of financial companies.