Investing in small cap stocks has historically been a way to outperform the market, as small cap companies typically grow faster on average than the blue chips. That outperformance comes with a price, however, as there are occasional periods of higher volatility. The one and a half month time period since the end of the third quarter is one of those periods, as the Russell 2000 ETF (IWM) has underperformed the larger S&P 500 ETF (SPY) by about 4 percentage points. Given that the funds we track tend to have a disproportionate amount of their portfolios in smaller cap stocks, they have seen some volatility in their portfolios too. Actually their moves are potentially one of the factors that contributed to this volatility. In this article, we use our extensive database of hedge fund holdings to find out what the smart money thinks of Choice Hotels International, Inc. (NYSE:CHH).

Choice Hotels International, Inc. (NYSE:CHH) was in 18 hedge funds’ portfolios at the end of September. CHH has actually experienced a slight increase in activity from the world’s largest hedge funds recently, as there were 17 hedge funds in our database with CHH positions at the end of the previous quarter. While the stock is lowly building its net of long investors, it has not succeeded to intrigue many billionaires (to see which stocks are most popular with the wealthy elite, take a look at the list of 30 stocks billionaires are crazy about: Insider Monkey billionaire stock index). These stats about Choice Hotels International, Inc. (NYSE:CHH) are insufficient for us to make a conclusion if the stock is worth buying. Hence, we need to continue with our analysis.

To most stock holders, hedge funds are viewed as slow, outdated financial tools of the past. While there are over 8000 funds with their doors open at present, Our researchers look at the leaders of this group, approximately 700 funds. These money managers handle bulk of the hedge fund industry’s total capital, and by tailing their inimitable stock picks, Insider Monkey has deciphered a few investment strategies that have historically beaten the market. Insider Monkey’s flagship hedge fund strategy outpaced the S&P 500 index by 6 percentage points per year since its inception in May 2014 through early November 2018. We were able to generate large returns even by identifying short candidates. Our portfolio of short stocks lost 26.1% since February 2017 even though the market was up nearly 19% during the same period. We just shared a list of 11 short targets in our latest quarterly update.

We were examining Choice Hotels International, Inc. (NYSE:CHH) carefully and it came to our attention that VulcanValue Partners has recently added it to its portfolio. This was not the first time the fund was thinking CHH is an intriguing buy. Here it is what the fund said about the stock in its most recent investor letter:
“Choice Hotels is a company we have owned in the past, and it was a successful investment for us. The company is a franchise hotel operator, mostly in the midscale segment. Management is undertaking a brand rejuvenation project which has resulted in lower unit growth in the short run. However, we expect that the company should be able to sustain higher RevPAR (revenue per available room) growth over the long term. Their value has compounded steadily, and we are happy to once again own a small position in the portfolio.”
While the fund is confident about its purchase, we’ll analyze Choice Hotels International, Inc. (NYSE:CHH) further, taking a look at the latest hedge fund action regarding the stock. 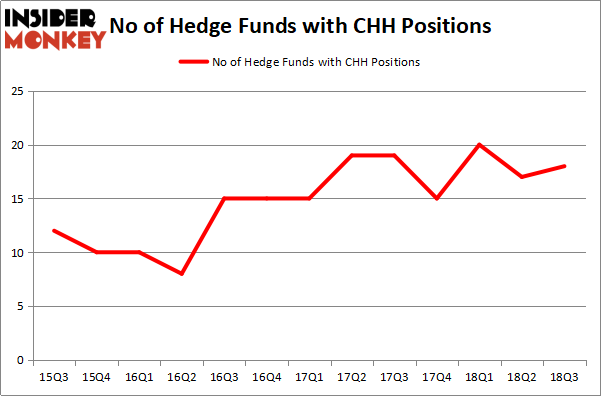 More specifically, Renaissance Technologies was the largest shareholder of Choice Hotels International, Inc. (NYSE:CHH), with a stake worth $104.8 million reported as of the end of September. Trailing Renaissance Technologies was Echo Street Capital Management, which amassed a stake valued at $101.3 million. Arrowstreet Capital, GLG Partners, and Markel Gayner Asset Management were also very fond of the stock, giving the stock large weights in their portfolios.

As you can see these stocks had an average of 19 hedge funds with bullish positions and the average amount invested in these stocks was $336 million. That figure was $277 million in CHH’s case. ARRIS International plc (NASDAQ:ARRS) is the most popular stock in this table. On the other hand Pinnacle Financial Partners, Inc. (NASDAQ:PNFP) is the least popular one with only 13 bullish hedge fund positions. Choice Hotels International, Inc. (NYSE:CHH) is not the least popular stock in this group but hedge fund interest is still below average. This is a slightly negative signal and we’d rather spend our time researching stocks that hedge funds are piling on. In this regard ARRS might be a better candidate to consider a long position.

Is Agilent Technologies Inc. (NYSE:A) A Good Stock To Buy?

Already Up 48% in 2018, Bill Ackman Sees Bigger Gains Ahead for Chipotle Mexican...

Hedge Funds Waiting to See What Marvin Ellison Has in Store for Lowe’...
Monthly Newsletter Strategy
Download a free copy of our newsletter and see the details inside!
Hedge Fund Resource Center
Related News
10 Best Hotel Rewards Program For Business Travelers 10 Cities With The Most Hotel Rooms in The World 10 Largest Hotel Chains In The US 15 Biggest Hotel Chains In The World Hedge Funds Are Crazy About Choice Hotels International Inc (CHH): 88% Surge in Ownership Is Choice Hotels International, Inc. (CHH) a Good Stock To Buy? Should You Buy Orient-Express Hotels Ltd. (NYSE:OEH)? 5 Ways You Can Eliminate Credit Card Debt 10 Easiest Road Test Sites in NY and NJ 10 Hottest Selling Products in the USA in 2018
Billionaire Hedge Funds