Fast-casual leader Chipotle Mexican Grill, Inc. (NYSE:CMG) reported another quarter of sales and earnings growth earlier this month. However, the company reported a lower operating margin, primarily due to higher food costs, which limited EPS growth to 7.7%. After growing reliably for several years, Chipotle stock has been on a roller-coaster ride for the past year, as investors debate whether the company can continue to grow quickly. 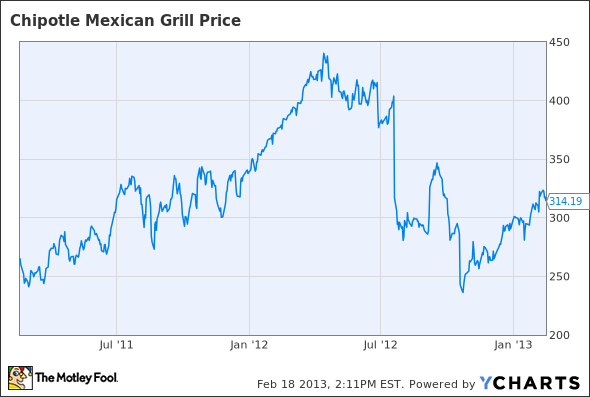 While there are legitimate reasons for concern, Chipotle is far from saturating the market, and has very high customer loyalty, which should permit long-term profitable growth. Moreover, its new ShopHouse Asian Kitchen concept will open up additional market opportunities if successful. With the stock trading at a more modest valuation today than a year ago, Chipotle is becoming attractive again for long-term investors.

Is the growth opportunity fading?
In early 2012, it seemed to many investors that Chipotle could do no wrong. The stock ran up from $350 to $440 in the first few months of the year. But investors were particularly disappointed by the company’s second-quarter earnings report, because while Chipotle handily beat earnings estimates, it offered weak guidance for the rest of the year.

Chipotle reinforced the perception of lower growth in its earnings report earlier this month. Comparable restaurant sales increased by only 3.8% last quarter, and management predicted “flat to low single digit comparable restaurant sales excluding additional menu price increases” for 2013. On the other hand, the company plans to open 165 to 180 new restaurants this year, which will keep growth rates in the double digits.

No reason to panic
At 36 times trailing earnings, Chipotle is still priced for growth, but not for perfection. While management’s 2013 outlook seems weak at first glance, the slower growth is the result of previous menu price increases rolling off. Chipotle’s management has made a conscious decision to avoid frequent price increases in order to build customer loyalty. However, with no major price increases in 2012 and food costs continuing to rise, there is a good chance that Chipotle will raise prices this year, which will boost comparable restaurant sales and operating margin.