With the third-quarter round of 13F filings behind us it is time to take a look at the stocks in which some of the best money managers in the world preferred to invest or sell heading into the fourth quarter. One of these stocks was Chico’s FAS, Inc. (NYSE:CHS).

Chico’s FAS, Inc. (NYSE:CHS) investors should be aware of a decrease in activity from the world’s largest hedge funds in recent months. CHS was in 18 hedge funds’ portfolios at the end of September. There were 20 hedge funds in our database with CHS positions at the end of the previous quarter. Our calculations also showed that CHS isn’t among the 30 most popular stocks among hedge funds.

At Q3’s end, a total of 18 of the hedge funds tracked by Insider Monkey were bullish on this stock, a change of -10% from the second quarter of 2018. Below, you can check out the change in hedge fund sentiment towards CHS over the last 13 quarters. With hedgies’ sentiment swirling, there exists an “upper tier” of noteworthy hedge fund managers who were increasing their holdings substantially (or already accumulated large positions). 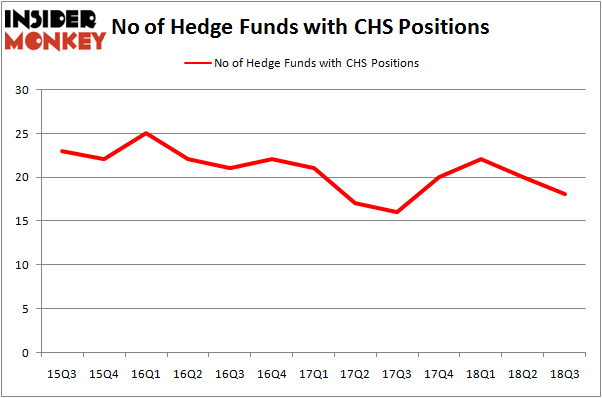 According to publicly available hedge fund and institutional investor holdings data compiled by Insider Monkey, Renaissance Technologies, managed by Jim Simons, holds the number one position in Chico’s FAS, Inc. (NYSE:CHS). Renaissance Technologies has a $42.7 million position in the stock, comprising less than 0.1%% of its 13F portfolio. Coming in second is Arrowstreet Capital, led by Peter Rathjens, Bruce Clarke and John Campbell, holding a $8.7 million position; the fund has less than 0.1%% of its 13F portfolio invested in the stock. Some other members of the smart money that are bullish consist of Cliff Asness’s AQR Capital Management, John Overdeck and David Siegel’s Two Sigma Advisors and Dmitry Balyasny’s Balyasny Asset Management.

Judging by the fact that Chico’s FAS, Inc. (NYSE:CHS) has experienced declining sentiment from the aggregate hedge fund industry, we can see that there was a specific group of hedge funds who sold off their full holdings heading into Q3. At the top of the heap, Andrew Feldstein and Stephen Siderow’s Blue Mountain Capital said goodbye to the largest investment of all the hedgies watched by Insider Monkey, totaling an estimated $1.2 million in stock, and Paul Tudor Jones’s Tudor Investment Corp was right behind this move, as the fund dropped about $0.5 million worth. These bearish behaviors are intriguing to say the least, as aggregate hedge fund interest fell by 2 funds heading into Q3.

As you can see these stocks had an average of 9.75 hedge funds with bullish positions and the average amount invested in these stocks was $64 million. That figure was $75 million in CHS’s case. NutriSystem Inc. (NASDAQ:NTRI) is the most popular stock in this table. On the other hand Compass Diversified Holdings LLC (NYSE:CODI) is the least popular one with only 4 bullish hedge fund positions. Chico’s FAS, Inc. (NYSE:CHS) is not the most popular stock in this group but hedge fund interest is still above average. This is a slightly positive signal but we’d rather spend our time researching stocks that hedge funds are piling on. In this regard NTRI might be a better candidate to consider a long position.

Hedge Funds Are Selling Cameco Corporation (CCJ)
Monthly Newsletter Strategy
Download a free copy of our newsletter and see the details inside!
Hedge Fund Resource Center
Related News
Check Out These 34 Stories To Find Out What’s Happening In The Financial Markets Today Hedge Funds Are Souring On Chico’s FAS, Inc. (CHS) Why Tesla, PTC Therapeutics, Freeport-McMoRan, and Two More Are in the Spotlight Big Investment in Avon Products, Inc. (AVP) and Four Other Picks Send Barington Capital’s Returns Through the Roof Amazon.com, Inc. (AMZN) and Alphabet Inc (GOOGL) Among Stocks in Spotlight on Wednesday Why Shares of Chico’s FAS, Inc. (CHS) Are Down on Thursday Why Are These 5 Stocks Deep in the Red Today? 11 Countries With The Worst Modern Music In The World The Top 5 Robo Advisor Apps of 2018 Five Reasons You Need a Day-Trading Mentor
Billionaire Hedge Funds