Is Cheniere Energy, Inc. (LNG) A Good Stock To Buy?

Cheniere Energy, Inc. (NYSEAMEX:LNG) investors should be aware of an increase in hedge fund interest of late. LNG was in 42 hedge funds’ portfolios at the end of September. There were 41 hedge funds in our database with LNG holdings at the end of the previous quarter. Our calculations also showed that LNG isn’t among the 30 most popular stocks among hedge funds.

How have hedgies been trading Cheniere Energy, Inc. (NYSEAMEX:LNG)?

At the end of the third quarter, a total of 42 of the hedge funds tracked by Insider Monkey held long positions in this stock, a change of 2% from the second quarter of 2018. Below, you can check out the change in hedge fund sentiment towards LNG over the last 13 quarters. So, let’s find out which hedge funds were among the top holders of the stock and which hedge funds were making big moves. 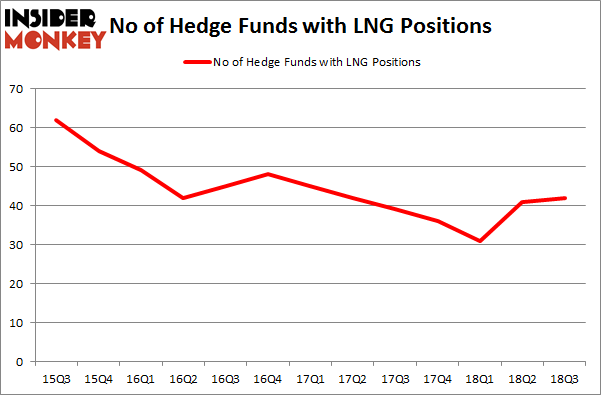 According to publicly available hedge fund and institutional investor holdings data compiled by Insider Monkey, Carl Icahn’s Icahn Capital LP has the most valuable position in Cheniere Energy, Inc. (NYSEAMEX:LNG), worth close to $1.6247 billion, accounting for 6.4% of its total 13F portfolio. Coming in second is Seth Klarman of Baupost Group, with a $986.5 million position; the fund has 7.6% of its 13F portfolio invested in the stock. Other peers with similar optimism encompass Michael Lowenstein’s Kensico Capital, Kevin Michael Ulrich and Anthony Davis’s Anchorage Advisors and PVH’s Zimmer Partners.

With a general bullishness amongst the heavyweights, specific money managers have been driving this bullishness. Viking Global, managed by Andreas Halvorsen, created the most valuable position in Cheniere Energy, Inc. (NYSEAMEX:LNG). Viking Global had $41 million invested in the company at the end of the quarter. Gifford Combs’s Dalton Investments also initiated a $14 million position during the quarter. The other funds with brand new LNG positions are Andrew Feldstein and Stephen Siderow’s Blue Mountain Capital, Charles Lemonides’s Valueworks LLC, and Kevin D. Eng’s Columbus Hill Capital Management.

As you can see these stocks had an average of 16.5 hedge funds with bullish positions and the average amount invested in these stocks was $469 million. That figure was $5.97 billion in LNG’s case. Textron Inc. (NYSE:TXT) is the most popular stock in this table. On the other hand SK Telecom Co., Ltd. (NYSE:SKM) is the least popular one with only 5 bullish hedge fund positions. Compared to these stocks Cheniere Energy, Inc. (NYSEAMEX:LNG) is more popular among hedge funds. Considering that hedge funds are fond of this stock in relation to its market cap peers, it may be a good idea to analyze it in detail and potentially include it in your portfolio.