Investors love stocks that consistently beat the Street without getting ahead of their fundamentals and risking a meltdown. The best stocks offer sustainable market-beating gains, with robust and improving financial metrics that support strong price growth. Does Cheniere Energy, Inc. (NYSEAMEX:LNG) fit the bill? Let’s look at what its recent results tell us about its potential for future gains.

What we’re looking for
The graphs you’re about to see tell Cheniere’s story, and we’ll be grading the quality of that story in several ways:

Growth: Are profits, margins, and free cash flow all increasing?
Valuation: Is share price growing in line with earnings per share?
Opportunities: Is return on equity increasing while debt to equity declines?
Dividends: Are dividends consistently growing in a sustainable way? 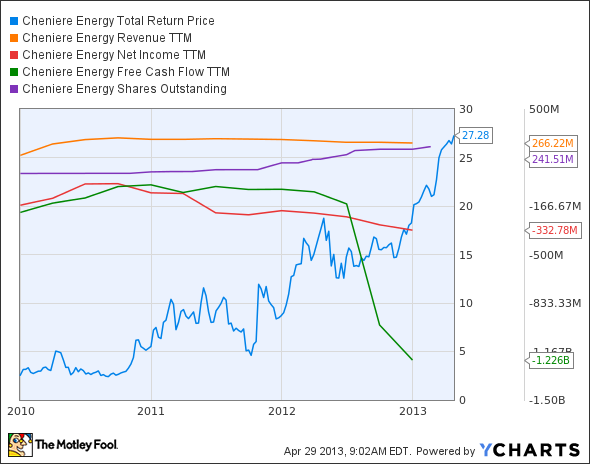 How we got here and where we’re going
Cheniere Energy, Inc. (NYSEAMEX:LNG)’s been a great investment, that much is undeniable — in the past three years, it’s returned nearly 1,000% for investors lucky enough to get in at the beginning. However, little of that optimism is reflected in the company’s fundamentals, which merit a middling three out of seven passing grades. Are brighter days really ahead for Cheniere Energy, Inc. (NYSEAMEX:LNG), or are investors only chasing after unsustainable promises?

Ever since the end of the 2009 crash, investors and pundits have predicted that Cheniere’s unique position as America’s gateway to international natural gas transactions — first as an importer, and then later as an exporter when it became clear that America’s nat-gas prices were far below that seen in other developed nations. Cheniere Energy, Inc. (NYSEAMEX:LNG)’s the only company — in partnership with France’s TOTAL S.A. (ADR) (NYSE:TOT) — to operate an approved export terminal for liquid natural gas in the United States. While others might get their own terminals in years to come, this is a huge advantage that ought to pay off if everything comes together.

It’s undeniable that America has vast nat-gas deposits waiting to be tapped. In fact, the amount of natural gas we think we have continues going up as geologists revise their understanding of our reserves, leaving companies with a glut of cheap nat-gas and nowhere to sell it. Chesapeake Energy Corporation (NYSE:CHK) has already taken major steps away from the nat-gas drilling game as a result, as have other producers. This should stabilize prices, but there’s a long way for nat-gas prices to go in the United States before they reach levels seen everywhere else.