Casey’s General Stores, Inc. (NASDAQ:CASY) was in 18 hedge funds’ portfolios at the end of the third quarter of 2018. CASY shareholders have witnessed an increase in enthusiasm from smart money recently. There were 17 hedge funds in our database with CASY positions at the end of the previous quarter. Our calculations also showed that CASY isn’t among the 30 most popular stocks among hedge funds.

At Q3’s end, a total of 18 of the hedge funds tracked by Insider Monkey were bullish on this stock, a change of 6% from the second quarter of 2018. On the other hand, there were a total of 21 hedge funds with a bullish position in CASY at the beginning of this year. With hedgies’ capital changing hands, there exists a select group of key hedge fund managers who were increasing their holdings considerably (or already accumulated large positions). 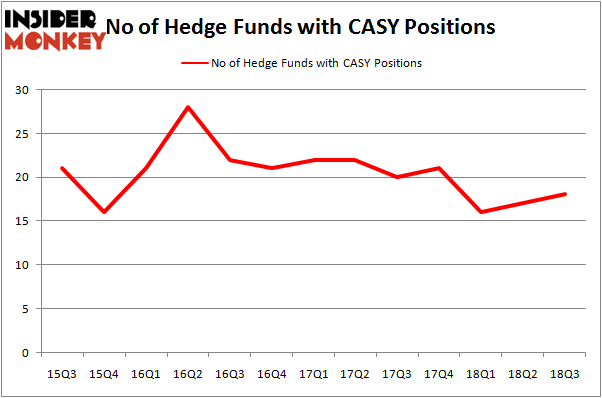 More specifically, Citadel Investment Group was the largest shareholder of Casey’s General Stores, Inc. (NASDAQ:CASY), with a stake worth $27.2 million reported as of the end of September. Trailing Citadel Investment Group was Arrowstreet Capital, which amassed a stake valued at $16.4 million. GAMCO Investors, Marshall Wace LLP, and Two Sigma Advisors were also very fond of the stock, giving the stock large weights in their portfolios.

Now, some big names were leading the bulls’ herd. Marshall Wace LLP, managed by Paul Marshall and Ian Wace, assembled the biggest position in Casey’s General Stores, Inc. (NASDAQ:CASY). Marshall Wace LLP had $8.4 million invested in the company at the end of the quarter. John Overdeck and David Siegel’s Two Sigma Advisors also made a $7.1 million investment in the stock during the quarter. The other funds with brand new CASY positions are Mike Vranos’s Ellington, Matthew Tewksbury’s Stevens Capital Management, and Richard Driehaus’s Driehaus Capital.

As you can see these stocks had an average of 18.25 hedge funds with bullish positions and the average amount invested in these stocks was $325 million. That figure was $89 million in CASY’s case. Arris International plc (NASDAQ:ARRS) is the most popular stock in this table. On the other hand Pinnacle Financial Partners, Inc.(NASDAQ:PNFP) is the least popular one with only 13 bullish hedge fund positions. Casey’s General Stores, Inc. (NASDAQ:CASY) is not the least popular stock in this group but hedge fund interest is still below average. This is a slightly negative signal and we’d rather spend our time researching stocks that hedge funds are piling on. In this regard ARRS might be a better candidate to consider a long position.

Should You Buy The Hanover Insurance Group, Inc. (THG)?
Monthly Newsletter Strategy
Download a free copy of our newsletter and see the details inside!
Hedge Fund Resource Center
Related News
Should You Follow the Smart Money Out of Casey’s General Stores Inc (CASY)? Five Consumer Stocks Chilton Investment Was Piling Into Five Dividend Growth Stocks Showering Shareholders With Cash Is Casey’s General Stores, Inc. (CASY) a Good Buy? This Metric Says You Are Smart to Sell The Fresh Market Inc (TFM) Is Safeway Inc. (SWY) Going to Burn These Hedge Funds? Hedge Funds Are Crazy About The Kroger Co. (KR) 11 Countries With The Worst Modern Music In The World The Top 5 Robo Advisor Apps of 2018 Five Reasons You Need a Day-Trading Mentor
Billionaire Hedge Funds