Is Carlisle Companies, Inc. (CSL) A Good Stock To Buy?

Carlisle Companies, Inc. (NYSE:CSL) was in 22 hedge funds’ portfolios at the end of September. CSL has seen an increase in hedge fund interest in recent months. There were 16 hedge funds in our database with CSL positions at the end of the previous quarter. Our calculations also showed that CSL isn’t among the 30 most popular stocks among hedge funds.

At the end of the third quarter, a total of 22 of the hedge funds tracked by Insider Monkey held long positions in this stock, a change of 38% from the previous quarter. Below, you can check out the change in hedge fund sentiment towards CSL over the last 13 quarters. So, let’s examine which hedge funds were among the top holders of the stock and which hedge funds were making big moves. 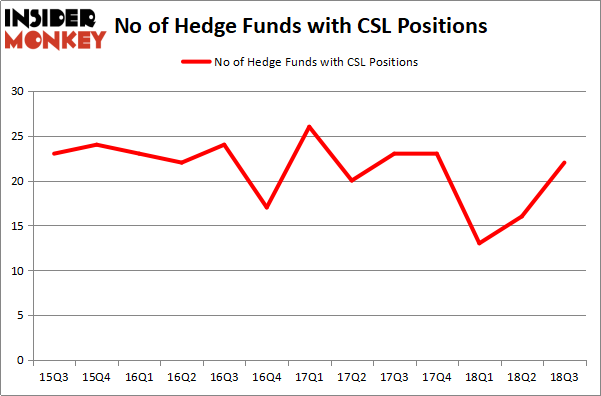 More specifically, Select Equity Group was the largest shareholder of Carlisle Companies, Inc. (NYSE:CSL), with a stake worth $169.8 million reported as of the end of September. Trailing Select Equity Group was Pzena Investment Management, which amassed a stake valued at $71.2 million. Point72 Asset Management, D E Shaw, and Millennium Management were also very fond of the stock, giving the stock large weights in their portfolios.

Consequently, some big names have jumped into Carlisle Companies, Inc. (NYSE:CSL) headfirst. Point72 Asset Management, managed by Steve Cohen, assembled the most valuable position in Carlisle Companies, Inc. (NYSE:CSL). Point72 Asset Management had $66 million invested in the company at the end of the quarter. Peter Rathjens, Bruce Clarke and John Campbell’s Arrowstreet Capital also made a $15.8 million investment in the stock during the quarter. The other funds with new positions in the stock are Jim Simons’s Renaissance Technologies, Ilya Boroditsky’s Precision Path Capital, and Ray Dalio’s Bridgewater Associates.

Let’s check out hedge fund activity in other stocks – not necessarily in the same industry as Carlisle Companies, Inc. (NYSE:CSL) but similarly valued. These stocks are KT Corporation (NYSE:KT), Western Gas Partners, LP (NYSE:WES), Dolby Laboratories, Inc. (NYSE:DLB), and Five Below Inc (NASDAQ:FIVE). All of these stocks’ market caps are similar to CSL’s market cap.

As you can see these stocks had an average of 18 hedge funds with bullish positions and the average amount invested in these stocks was $313 million. That figure was $460 million in CSL’s case. Dolby Laboratories, Inc. (NYSE:DLB) is the most popular stock in this table. On the other hand Western Gas Partners, LP (NYSE:WES) is the least popular one with only 8 bullish hedge fund positions. Carlisle Companies, Inc. (NYSE:CSL) is not the most popular stock in this group but hedge fund interest is still above average. This is a slightly positive signal but we’d rather spend our time researching stocks that hedge funds are piling on. In this regard DLB might be a better candidate to consider a long position.